Disney On Ice celebrates 100 Years of Magic with its annual visit to the Xcel Energy Center for eight performances from Dec. 6-9, 2012.

For Isao Matsuura, this will be his 14th year with Disney on Ice. He started in 1999 and has played the role of Pinocchio for all of that time.

“I just love playing the character,” he said. “Its less like acting and more like a skating number.”

A competitive skater prior to joining Disney On Ice, Isao hails from Okayama, and worked hard to win 2nd place at the National Sports Festival, 5th at Junior Nationals in Japan and 1st at the Western Japan Championships.

After competing for eight years with the Japan National Team, Matsuura said he wanted to both coach and become a professional skater where the object is to please the audience and not to win a competition.

“The competition was about me and the ice shows are about skating professionally for somebody else,” he said. “I joined the company and I really liked it.” 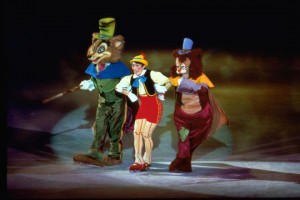 He says Disney is challenging and fun, because Pinocchio is a character kids and adults love. He enjoys his solo skate opportunities where he is able to perform his triple jumps while in costume.

Traveling around the world with Disney on tour allowed him to see the world. Over 15 years he hasn’t grown tired of traveling yet. As for visiting the Twin Cities?

“Minnesota is wonderful,” he said. “I love the skywalks, shopping and the Mall of America. There are so many great restaurants.”

It helps that a few other skaters have stayed on as long as 15 years. He isn’t lonely with a company of 47 skaters from all around the world, including around 15 Asian skaters.

The 100 Years show is different because it has so many chapters with so many stories and characters in the show. He said the beautiful costumes and familiar music work because they mix the old classics with the new stories to reach everyone.

From Snow White and Pinnocheo, to Milon and the Lion King, the show has it all.

“There is something for everybody,” he said. “Every generation can enjoy the show.”

Another reason the character stays fresh is the changing elements of choreography that is created with Sarah Kawahara. The Emmy Award winning choreographer once worked with Michelle Kwan and choreographed the skating segment for the Opening Ceremony of the 2002 Winter Olympics.

“Sarah choreographed everything and I learned so much from her,” he said. “Her choreography is amazing and I love skating to her program.”

The 100 Year’s show works for adults and kids because the characters and songs include the old and the new, from “When You Wish Upon A Star” to “Lion King” and “Beauty And The Beast”.

“The audience enjoys the songs just as much as the show,” he said.

The routine offers easy elements but also some new and challenging tricks that he must work hard to do well each performance.

“Every time I skate close to the audience I can see them smiling and having fun and that gives me so much energy,” he said.

Matsuura said he played baseball as a kid, and that around age 10, he was watching a skating competition on television and decided to give it a try. He eventually started classes and then entered competitions.

“I started kind of late,” he said. “I was curious and then I knew this was what I wanted to do since the first day I was on the ice. It was just such a passion.”

People ask Matsuura how long he will keep skating. It is a grueling schedule, lasting an average 10 months. This season started in September and runs through March. The 2013-14 season begins in August.

Matsuura said there will be a day when he has to hang up the skates and so he will keep going as long as he can.

“I just love performing and seeing the audience smiling, I just love that,” Matsurra said. “As long as I can perform I will keep skating.”

For his two months off Matsuura returns to Japan and works as a choreographer and a coach with the Japanese National Team.

Tickets are available at the Xcel Energy Center Box Office, Ticketmaster Ticket Centers, by calling 800-745-3000 or online at www.ticketmaster.com.