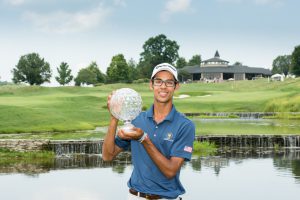 Akshay Bhatia with the Jack Nicklaus Trophy following the Final Round for the 43rd Boys Junior PGA Championship held at Valhalla Golf Club on Aug. 3, 2018 in Louisville, Kentucky. (Photo by Traci Edwards/PGA of America)

The 11th Junior Ryder Cup will be contested between the U.S. and Europe at Disneyland Paris, Sept. 24-25. The U.S. Junior Ryder Cup Team will feature six boys and six girls who are U.S. citizens and members of the high school graduating class of 2019, or younger.

The 12 players who have earned spots on the 11th United States Junior Ryder Cup Team include:

The idea for the Junior Ryder Cup came about in 1995, when a team of Europeans played an informal exhibition match against the Central New York PGA Section and area juniors. Two years later, the Junior Ryder Cup was formally introduced as an event in its own right, while played at Alcaidesa Links Golf Course, in Cadiz, Spain, and won by America, 9-7. For more information on the Junior Ryder Cup, visit JuniorPGAChampionship.com, JuniorRyderCup.com