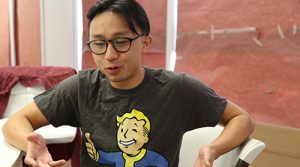 Raymond Ho says recent racist encounters and a falling out with a close friend after Charlottesville have shaken his trust in those around him. (New America Media photo)

SARATOGA, Calif. (Sept. 8, 2017) — In 2012, Raymond Ho was just entering college, his mind abuzz with new ideas and the prospect of new experiences. During his first week he met up with another San Jose native, someone Ho says “had the same questions I did.”

The pair became fast friends, and spent the next three years as college roommates. Their bond was fostered by frequent exchanges that moved from the political to the personal.
“We always had these great conversations,” recalls Ho. “He was definitely more conservative … but I respected his ideas.”
Then came 2016.
As the presidential race heated up, Ho says his friend (whose name Ho asked be withheld for privacy reasons) began to echo some of the more toxic rhetoric coming out of the Trump campaign. It began with comments about undocumented immigrants, or about women. Over time, their meetings grew more tense, their differences more stark.
Read the rest here:
http://newamericamedia.org/2017/09/when-hate-hits-home.php
Share