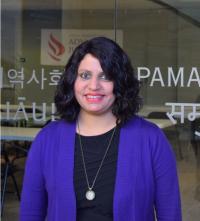 LOS ANGELES (Feb. 23, 2018) — Asian Americans Advancing Justice – Los Angeles (Advancing Justice-LA) welcomes Reshma Shamasunder as its new Vice President of Program Strategy . In this new role, Reshma will lead the organization’s “fight back” efforts in response to a new era of rising anti-immigrant policies and racial tensions. She brings nearly two decades of experience working in California and Massachusetts as well as regionally and nationally on immigrant rights issues.

“As a native Angeleno and a child of Indian immigrants, I am thrilled to be joining Advancing Justice-LA at this moment in time,” said Reshma. “The Los Angeles region and the state of California are leading the way in protecting the most vulnerable in our communities – immigrants, people of color, the poor – and I am inspired by this opportunity to help shape the Asian American and Pacific Islander effort to advance justice and resist oppression.”
Prior to joining Advancing Justice-LA, Reshma served as Deputy Director of Programs at the National Immigration Law Center and previously consulted with philanthropy, advocacy, and grassroots partners on policy campaigns and issues that benefit low-income, immigrant, and other vulnerable communities. From 2003 to 2015, Reshma served as Executive Director of the California Immigrant Policy Center (CIPC). Under her leadership, CIPC helped to spearhead groundbreaking campaigns at the state level, including placing limits on cooperation between local law enforcement and immigration authorities, preserving and expanding important health and human service programs for immigrant communities, winning driver’s licenses for all Californians, and furthering important immigrant integration efforts.
“Reshma has been a tremendous colleague and thought partner for Advancing Justice-LA on immigrant rights for many years,” said Advancing Justice- LA President and Executive Director Stewart Kwoh. “I am excited about her new role with us, and look forward to her vision and leadership as we head into another year of building the resistance in Sacramento, while we fight in Congress to protect undocumented immigrants and defend family-based immigration.”
In addition to her new duties at Advancing Justice-LA, Reshma currently serves on the board of CIPC and previously served on the boards of Health Access California and the South Asian Network in Los Angeles and was an inaugural fellow with the Rockwood Fellowship for a New California, a leadership program for California’s immigrant rights leaders. For her leadership, she has received numerous awards, including the Families USA Health Equity Advocate of the Year Award and the National Immigration Law Center Courageous Luminaries Award. Reshma holds dual Bachelor’s Degrees from UCLA and a Masters in City Planning from the Massachusetts Institute of Technology (MIT).
Asian Americans Advancing Justice – Los Angeles is the nation’s largest legal and civil rights organization for Asian Americans, Native Hawaiians, and Pacific Islanders (NHPI). Through direct services, impact litigation, policy advocacy, leadership development, and capacity building, Advancing Justice-LA focuses on the most vulnerable members of Asian American and NHPI communities while also building a strong voice for civil rights and social justice.
Share