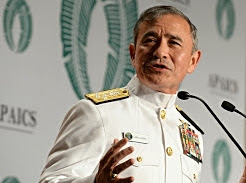 Earlier this year at its 20th Anniversary Gala, APAICS awarded Adm. Harris with the Lifetime Achievement Award for his tireless dedication and unwavering commitment in public service for securing and protecting U.S. national security abroad.

Floyd Mori, President and CEO of APAICS said of his nomination, “ADM Harry Harris has proven himself to be a great military leader, and the Asian American  and Pacific Islander community is proud of the example he has set for the entire nation. He has been particularly active in working with the Asian American and Pacific Islander community in fostering greater participation and engagement in public affairs. We congratulate ADM Harris, who is Japanese American, for becoming one of the top military leaders over the entire globe.”

Currently Adm. Harris is the commander of the U.S. Naval Forces in the Pacific, a position he has held since October of 2013. In this role, Adm. Harris oversees 100 million square miles of Indo-Asia-Pacific region, approximately 200 ships and submarines, 1,100 aircraft and 140,000 sailors and civilians.

He started his career with the U.S. Navy as a flight officer when he graduated from the Naval Academy in 1978 and worked his way up the ranks, logging in more than 4,400 hours in maritime patrol surveillance aircraft and serving in every U.S. geographical combatant command in Europe, Africa, and Asia. He also held the position as chief speechwriter to the Chairman of the Joint Chiefs of Staff and Deputy Chief of Naval Operations for Communication Networks (OPNAV N6).

U.S. Sen. Mazie Hirono (HI-D), a member of the Senate Armed Services Committee, said Harris’ distinguished career of service to our country and strong leadership demonstrates that he will excel in his new role as Pacific Commander. As a member of the Senate Armed Services Committee and with the headquarters for U.S. Pacific Fleet Command located in Hawaii, I’ve had the opportunity to develop a strong relationship with Admiral Harris. His understanding of the importance of our nation’s strategic rebalance to the Pacific will be vital in his new role.

“I look forward to continuing to work with Admiral Harris in his new capacity upon confirmation,” said Hirono.

Adm. Harris’s father was an American Chief Petty Officer who met his mother while on duty in Kobe, Japan where he was born. He said the movie Go For Broke made him proud of his Japanese heritage and the courage and patriotism of Japanese Americans who served in the 100th Battalion, 442nd Regimental Combat Team and the Military Intelligence Service inspired his career aspirations with the U.S. Navy.

Adm. Harris was born in Japan and raised in Tennessee and Florida. Following graduation from the U.S. Naval Academy in 1978 and designation as a naval flight officer, he was assigned to VP-44. His subsequent operational tours include tactical action officer aboard USS Saratoga (CV 60); operations officer in VP-4 at Barbers Point, Hawaii; three tours with Patrol and Reconnaissance Wing 1 at Kami Seya, Japan; Director of Operations for U.S. 5th Fleet at Manama, Bahrain; and Director of Operations for U.S. Southern Command.