ZiLin has taken her Miss China Universe 2011 crown and turned it into a golden opportunity on “The Face” of ULTA beauty television show Tuesdays at 8 p.m. (CST) on Oxygen.

“The Face,” hosted by photographer Nigel Barker, features supermodel coaches for the contestants who compete to find the face of ULTA Beauty, one of the fastest growing beauty retailers in the United States. The show offers a view inside the industry as teams of aspiring models, each led by a supermodel coach, are guided through real life assignments, including photo shoots and commercials. 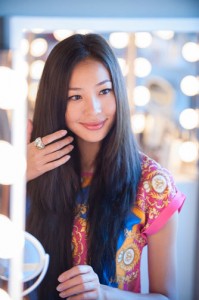 “I am following my dream! Wish me luck,” said ZiLin, 25, who was born and raised in a traditional Chinese home in Shanghai. Her natural beauty led her into modeling, and her and easy-going personality furthered her career in fashion with interests in styling and design and a dream to become a world-famous model.

Raised in China during its phenomenal growth of the past 20 years, ZinLin is a product of the monumental transition of the international city of Shanghai.

“I love this fantastic city!” she said. “I won my first modeling competition there and it is where I got my start. There is so much growth happening here it makes me very proud.”

She is proud to be from China today but said that the opportunities available to her today would not have been there just 20 years ago, even in bustling Shanghai.

“My mom always says that if I was born 20 to 30 years ago, she would have been afraid that I wouldn’t have had enough food to eat,” she said, but joked that her mother’s comments were really to poke fun at her big appetite.

ZinLin said it is now possible to chase her dream with more people paying attention to China and creating so many opportunities.

“The whole industry is growing,” she said. “We love new fashions and can be forward thinkers.”

The economic changes in China contributed to the growth in the fashion industry. More than just manufacturing name brands for manufacturers in the West, the Chinese designers are now creating their own selections, ZinLin said, with more exhibited symbolism such as the phoenix and dragon, and use of natural materials like jade. 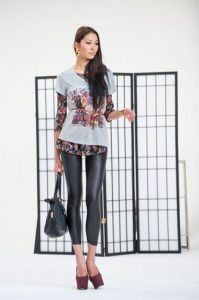 “Now, a lot of brands are really paying attention to the Chinese market,” she said. “There are more Chinese designers that are getting noticed all over the world.”

As an international city Shanghai is a blend of many cultures and influences. The difference today, she said, is that the history and culture is more educated and has created a new future from its proud past.

It has long been ZinLin’s goal to come to America and as an international model. She said it is a dream come true to be able to do something so exciting at such a young age, and on such terms as a Chinese model on a popular American television show.

Landing the role on The Face came about after winning the Miss China Universe pageant. The title created the opportunity to visit New York City for pageant related press events, and she met a producer of the show.

“The Face” is produced by Shine America with Eden Gaha, Paul Franklin and Andrew Frank serving as executive producers.

“A few months later got a call from them to ask me whether I would be interested in being on ‘The Face’,” she said. “I wanted to learn from Naomi Campbell, Karolina Kurkova and Coco Rocha. I of course had to go to the Los Angeles audition.” 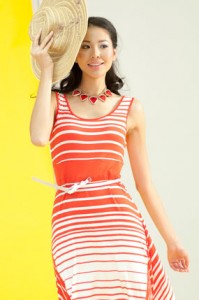 She said Yuesai and Naomi Campbell are her role models because of their hard work ethic and that they present themselves as such strong people. They were major influences on her career, she said.

As far as she knows there has not been a Chinese pageant winner in an American reality television show and she is excited to be the first. She is not sure where the exposure will lead her but said the experience will be good.

In the meantime she will continue taking acting classes and has hopes the modeling experience will create new opportunities in China and the West.