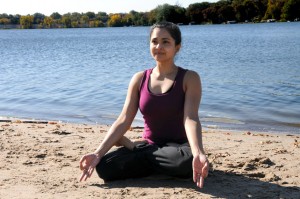 BLAINE, Minn. — Go to any health club in the metro area and you will find that they offer all types of yoga classes, both traditional as well as signature classes ranging from hot yoga, athletic yoga, yoga sculpt and many others.

Advertisement show models showing yoga poses, yoga videos appear on Youtube as well as in many web sites. Additionally more and physicians tout the benefits of yoga to one’s health.

If one wants to participate in a yoga class, how does one begin to choose which type of yoga is best for you? To help you choose, the following interview with Vinita Khatavkar might help you maneuver through the maze of information.

Q .Can you tell me about yourself?

I have been practicing yoga since I was 18 years old, at B.K.S. Iyengar’s Kamayani Institute in Pune, India. He is most famous for introducing yoga in the United States and attention to body alignment and use of props in yoga and for his classic book, Light on Yoga , considered the bible on hatha yoga since its publication in 1966.  I have also studied the book Light on Yoga extensively as well as Yoga, a yoga Journal book.

Q. Yoga originates in India. How did this come about?

The first book to systemize the practice was the classical work dating back to 200 B.C the “Yoga Sutras” by Patanjali, who coordinated the spiritual discipline in the sutras. He succeeded in decoding and interpreting the oral concepts into a collection of 195 sutras.

The work of Swatmarama, “Hatha Yoga Pradipika”, deals solely with physical discipline, the asanas (postures). On the other hand, The Bhagavad Gita, the Hindu spiritual scripture, is the most important authority on Yoga philosophy. It contains a discussion between Sri Krishna and Arjuna on the purpose of life and the meaning of yoga.

In the later years it was Swami Sivananda Saraswati and his student Visnu Devananda that brought their teaching to the West & set up Sivananda Yoga Vedanta centers in Canada.

In 1966 Swami Satchidananda, a disciple of Sivananda, arrived in United States where at Woodstock thousands of Americans chanted their first Om.

But the man who deserves the most credit is Krishnamacharya who created the type of physical yoga we all follow today. He is teacher to Iyengar, Pattabi Jois and Indra Devi. The latter is considered America’s First Lady of yoga. Today Krishnamacharya’s son, T. K. V. Desikachar, continues to spread his father’s message of yoga to the west.

Q: What is the essence of yoga?

Yoga is a way of life and is derived from the Sanskrit root yuj. Yoga means to join, yoke, and bind the body, mind and inner spirit. This art of living deals with universal truths and teachings. Patanjali follows a path of yoga that has eight limbs:

• Niyama – self discipline and surrender of ego

• Pratyahara- withdrawal of the mind of the dominant senses and exterior objects.

• Dharana- Concentration of the mind

• Samadhi- Super-conscious state brought on by profound meditation wherein an individual becomes one with the Universal spirit.

Q: Is yoga related to any religious practice?

No, but it is in what you take from your practice and your outlook towards yoga. Let me try to explain.

The Upanishads (sacred text of Hinduism) contains little of the asana practice. Instead it refers to a way, a discipline or a path taken to achieve liberation or enlightenment. Here are the four paths in the Upanishads:

•Karma yoga – Is the active path. Karma yoga is giving oneself to the cause of humanity. The yogi works hard both physically & mentally to eliminate ego, purified mind to a better health and selfless service to the community

• Jnana Yoga – This is the philosophical path. This usually the most difficult path as it demands unclouded & sharp mind. It helps to cultivate a mind that is content and tranquil.

• Bhakti yoga – This is the devotional path. Through various practices such as praying, chanting, repetition of mantras the negativity, jealousy, anger, hatred, the emotional energy is channeled into devotion and divine love. The yogi will find God in all.

• Raja yoga – is the scientific path. Raja yoga is a form of Hatha yoga that emphasizes asanas (posture) and pranayama (breath control) Raja yoga prescribes a practical system of concentration to lead to healthy body, posture and breathe regulation.

These days we practice more of the Raja yoga, since people look at the other 3 paths as religion. But religion is what you believe in and not what Hindu Vedas & Upanishads tell you. Yoga deals with the universal truth and only when this foundation is strong can the whole person develop mind, body and spirit.

Q: What are the different types of yoga and how do they differ from one another?

B.K.S Iyengar’s Iyengar Yoga emphasizes on the physical body and introduced the world to precision in poses, external alignment with affect on internal organs. The use of props and ropes help less flexible yogis work on the asanas to get the benefits of therapeutic sequences.

Several other styles are:

• Kripalu Yoga was developed by Amrit Desai under the guidance of his Indian guru Kripalvananda. It encourages students to find their own strengths and weaknesses, eventually learning to hold poses longer and work with their prana.

• Yogi Bhajan, a Sikh who immigrated to United States from India, introduced Kundalini Yoga. It combines asana with breath, chanting and meditation designed to clear nadis and awaken the kundalini shakti ( divine energy)

Q: How does one choose which yoga style is right for one?

The best way is to keep an open mind and try various formats. Different teachers also have their own personality flourish through the various types of classes they teach. It is good to try different teachers as well and find one that fits you.

Q: What health benefits can one expect of yoga?

Yoga begins with healing and strengthening the muscles, joints, bringing stability in the poses and is a perfect blend of movement and resistance. On a deeper level it regulates blood circulation to all extremities. It helps in the digestive health, balance and restoration of your body. Mentally, poses energize the mind, stimulate the nervous system to help relieve exhaustion and depression. Every pose has its own health benefits and under the guidance of an educated yoga teacher, you will get a better understanding of which poses will benefit your physical and mental health. 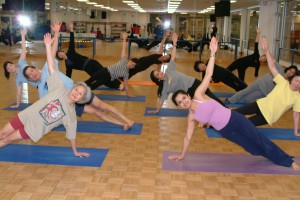 Q: Looking at a yoga book, one wonders if one needs to be flexible like a gymnast or a dance to be able to do many of the poses.

The benefit of yoga is that it can be done by anyone at any age. You definitely do not need to be a gymnast!!! Novice yogis tend to be competitive, expecting to be flexible from day one. They get discouraged easily. I tell my students to be patient, forgiving towards their bodies and keep faith in their practice.

Q: What is the earliest age that one can start yoga practice?

Guruji recommends starting yoga practice at the age of 8 to 10.

Q Can one learn yoga as an adult?

Absolutely! My mother and best friend Lori started yoga in their late 30’s to early 40’s and there are times they have better practice and poses than the younger yogis!

Just make sure to let the teacher know if you have any physical or health issues that might prevent you from doing certain poses.

Q: What else can you say about yoga to encourage readers?

Whatever your path and beliefs I encourage everyone to practice yoga for its physical and mental benefits. It will transform your life. Keep an open outlook, follow the teacher’s instructions and listen to your body. Focus on practicing sun salutations, poses and deep breathing daily to build a healthy, strong flexible body and mind that will be with you through your lifetime.