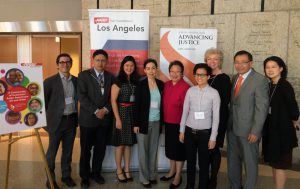 “As Asian American older adult populations grow, so do their needs,” said Daphne Kwok, AARP Vice President of Multicultural Leadership, Asian American and Pacific Islander Audiences. “The first steps to ensuring that the needs of our increasingly diverse and underserved communities are met is the collection and analysis of disaggregated data.”

Among these critical concerns are economic challenges, language and educational barriers that limit access to critical services, and health issues.

Among those age 65 or older living in Los Angeles County, Korean and Cambodian Americans are more likely than any racial group to have low incomes and live below the poverty line; data from the U.S. Census Bureau’s American Community Survey show that more than half of Korean and Cambodian American seniors countywide have low incomes, while nearly a quarter are poor. Nearly half of Asian American seniors living alone live below the poverty line, a rate higher than any other racial group countywide.

According to Census Bureau data, approximately 62 percent of Asian Americans age 50-plus in Los Angeles County (almost 300,000 people) are limited English proficient (LEP) and face some challenge communicating in English that impacts their ability to access basic services. A majority of Cambodian, Vietnamese, Korean, Chinese, and Thai American older adults are LEP. Among 50-plus households in Los Angeles County, Asian American older-adult households have the highest rate of linguistic isolation. 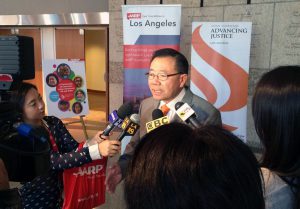 Stewart Kwoh, executive director and president of Asian Americans Advancing Justice-Los Angeles, speaks with the media at the report’s launch. According to the report, the Asian American older-adult population in Los Angeles County grew 56 percent from 2000 to 2010; among racial groups, only the county’s Latino population age 50-plus grew at a faster rate.

“Asian Americans are often overlooked in public policy discussions regarding older adults,” said Amy Phillips, Director of Senior Services at Little Tokyo Service Center and co-Chair of the Asian Pacific Policy and Planning Council’s (A3PCON) Older Adults Task Force. “Reports such as this one are important in helping to raise the visibility of our community’s growing needs.”

“Census Bureau data disaggregated by ethnic group were critical to this analysis,” said Jeffer Giang, Research Analyst at Asian American Advancing Justice-Los Angeles and primary author of the report. “Yet more data on vulnerable populations, including Pacific Islanders and lesbian, gay, bisexual, transgender, and queer (LGBTQ) people, are needed if we’re to fully understand the challenges our communities face.”

“A Community of Contrasts: Asian Americans 50 and Older (Los Angeles County)” (PDF) can be downloaded at advancingjustice-la.org/aarp or by clicking here.

AARP is a nonprofit, nonpartisan organization, with a membership of nearly 38 million that helps people turn their goals and dreams into ‘Real Possibilities’ by changing the way America defines aging. With staffed offices in all 50 states, the District of Columbia, Puerto Rico, and the U.S. Virgin Islands, AARP works to strengthen communities and promote the issues that matter most to families such as healthcare security, financial security and personal fulfillment. AARP also advocates for individuals in the marketplace by selecting products and services of high quality and value to carry the AARP name. As a trusted source for news and information, AARP produces the world’s largest circulation magazine, AARP The Magazine and AARP Bulletin. AARP does not endorse candidates for public office or make contributions to political campaigns or candidates.To learn more, visit www.aarp.org or follow @aarp and our CEO @JoAnn_Jenkins on Twitter.