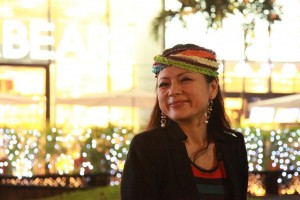 Bestselling Author Hellen Chen (above) gives examples of why the ability to love can be improved just like the ability to perform well in any task – including flower arrangements!

LOS ANGELES (March 14, 2014) — According to a report by the University of Virginia National Marriage Project called “Knot Yet: The Benefits and Costs of Delayed Marriage in America,” the age at which men and women marry is now at the highest of all time — 27 for women, and 29 for men.

Young adults have also come to see marriage as a “capstone” rather than a “cornerstone”— something they do after they have all their other ducks in a row, rather than a foundation for launching into adulthood and parenthood.

The only question is: what if by the time they have all their ducks in a row, it is also too late for starting a family and bearing children?

Having developed the reputation of assisting those who have the least chance to find a right match to actually tie the knot, the unorthodox matchmaker said, “It is not the success of your career that will make a marriage happy. Social statuses, having a house or a 6 figure income have no bearing on the success of a marriage.” said Chen.

Rita C was a typical example of a highly successful professional who had put career and personal interests first than marriage. She had turned down many suitors because they were “not good enough.” After she went past 38 years old and finally wanting to settle down and have a child, she panicked.

“I used to have suitors coming after me easily. It is shocking but now the tables are turned. I get turned down one after another by the guys I really liked.” she said.

In a Skype interview from Los Angeles, Chen talks about why modern dating is not working out, “Most people think there are always a better person out there. So they would spend three to four years dating, then break up, then spend another three to four years with someone else whom they think is better and break up again. And after 10-15 years later, they accumulated only bitter experiences.”

Rita approached Chen for help and in the end her marriage dream did come true. When interviewed, Rita said, “My advice for men and women now is don’t wait. No money made in the world can buy back those lost time.”

“Most singles are looking for that perfect match. But how could a ‘happily ever after’ come about if one does not possess real abilities to love? Whether you can keep a relationship going has everything to do with your ‘love ability,’ not how ‘perfect’ your better half is.” said Chen.

This is the same as a good chef able to create a tasty dish with just simple ingredients.

Thus just like training for sports or for a profession work, a person’s “love ability” needs its own training and development as well, it is not something that just “comes naturally if one meets the right guy or gal.”

Chen’s works in family, marriage and personal developments are featured in over 200 media publications in 20 countries. She has been a frequent guest on independent and network radio and TV shows on FOX, CBS, NBC and ABC etc.

In addition to writing 22 books and given thousands of lectures, Chen has released a series of love workshops specializing in assisting singles and couples to increase their abilities to love and enjoy a deeper relationship.

Her next workshop will be held on coming Saturday March 8 in Los Angeles.