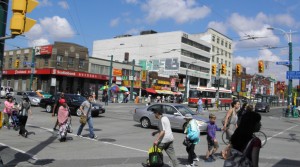 Toronto’s Chinatown is always buzzing with people and activities. (Photos by Bob San)

Those are words most often used to describe the city of Toronto. Having visited that city many times, I can certainly say that those are very accurate description of the biggest city in Canada.

The Greater Toronto Area (which includes several suburbs) has a population of just over 6 million. Its population reflects its reputation as a popular destination for immigrants for the past century. It is one of the world’s most diverse cities by percentage of non-native-born residents, with about 49 percent of the population born outside Canada.

Its diversity in culture, rich cultural scene and friendly but urban character make it a fun place to visit. There are so many reason to visit Toronto. Here is a list of my favorite things to do.

Downtown Toronto is a great place to stay because once you are there  you can walk all day or take the subway, buses and street cars to go anywhere.

A place one should visit is the CN Tower and the Rogers Center right next to it.Towering over the lake front, CN Tower is the second tallest tower in the world and offers great view of the entire city.

A recent addition that those who seek thrills must try is the Edgewalk, CN Tower’s newest attraction. For about $180, one can do a full circle hands-free walk on a 5 foot wide ledge encircling the top of the Tower’s main pod, 1168 feet (116 stories) above the ground. Visitors walk in groups of six, while attached to an overhead safety rail via a trolley and harness system. Trained EdgeWalk guides will encourage participants to push their personal limits, allowing them to lean back over Toronto with nothing but air and breathtaking views of Lake Ontario beneath them.

For those without the desire to do the EdgeWalk, they can browse through the top level or have lunch at the revolving restaurant.

Next door is the Rogers Center, home of the Toronto Bue Jays professional baseball team and the Toronto Argonauts football team. Formerly known as the Skydome, it is a humongous joint that is fan friendly with many bathrooms and large concourse.

A paddleboat makes its way across Toronto’s habor front. The Toronto Islands are in the background.

Toronto’s harbor front, while not as vibrant as Chicago’s  lakfront, is  still a nice way to spend a nice afternoon. One can walk along the water and enjoy the many art galleries, theatres, craft boutiques and restaurants.

Only a 10-minute ferry ride from fowntown, the Toronto islands offer a panoramic view of the city skyline, miles of parkland with beaches, barbecues and picnic tables, boat rentals, bicycle paths, a children’s farm and even an amusement park.

Toronto has a great cultural scene with many museums. The three I enjoy the most are:

No trip to Toronto is complete without a visit to the Royal Ontario Museum – Canada’s largest museum of world cultures and natural history. The ROM has world-renowned galleries of dinosaurs, Canada’s First Peoples, ancient Egypt, minerals and gems, biodiversity with live animal shows, and so much more.

Located just four blocks from Chinatown, the Art Gallery of Ontario is called by many Canada’s best museum. Its collection includes more than 80,000 works spanning the 1st century to the present day.

The gallery has 45,000 square metres (480,000 sq ft) of physical space, making it one of the largest galleries in North America. An added attraction with an Asian interest is that AGO is the home of the much anticipated exhibit by China’s dissident artist Ai WeiWei, According to What? THE exhibit, which runs through Oct. 27, is drawing huge attention from Toronto’s media.

As a Minnesotan, it was a great treat to visit the Hockey Hall of Fame. I went there specifically to look for the Miracle On Ice, and it was prominently displayed since it was named the top hockey story of the 20th Century. A hockey fan will have a blast with the Hall, as it details the history of the sport and has up to date displays of the great teams and players and all the Olympics and Stanley Cups.

Since Toronto is so diverse, you can’t say you have been there without visiting some of the ethnic areas. For my purpose, I am highlighting just the Chinese and South Asian hot spots.

Pacific Mall is Markham, a suburb 20 minutes east of downtown, is the biggest Chinese shopping mall in North America. No English needs to be spoken there.

To enjoy Chinese food and culture in Toronto, one no longer has to go to Chinatown in downtown. While Chinatown, with the  intersection of Dundas and Spadina as the hub, is vibrant, energetic and crowded with Chinese and tourists, it is no longer a destination for many Chinese Canadians.

Instead, several suburbs have emerged in the last 20 years as places where Chinese Canadians settle.

Suburbs such as Scarborugh, Markham and Richmond Hills now have huge Chinese populations. As a result, there are numerous shopping centers and malls that cater just to Chinese. I don’t need to speak English when I visit these places.

The biggest Chinese mall in the Greater Toronto Area is Pacific Mall, located on the border of the suburbs of Scarborough and Markham. In fact, some publications called Pacific Mall the largest indoor Chinese Asian mall in North America and outside of Asia.

Pacific Mall incorporates a traditional Pacific-style market, with over 450 mini-shops selling a large variety of retail goods, as well as specialties such as herbs and ginseng, Asian fashions, flowers, accessories, CDs, DVDs, audio hi-fi, cell phones, prescription eyeglasses and sunglasses, furniture, toys and stationery, and entertainment. It is also a well-known place for computer and car enthusiasts alike. There are a variety of places to buy Asian food and drinks in the mall.

Toronto also has a huge South Asian population and Little India sits just east of downtwon on Gerrard Street East between Greenwood Avenue and Coxwell Avenue. There are many Indian, Pakistani, Bangladeshi, Afghan and Sri Lankan restaurants, cafés, videos/DVD stores, clothing shops, electronic goods and home decor stores catering to the South Asian-Canadian communities. Along with Jackson Heights in New York and Devon Avenue in Chicago, it forms one of the largest South Asian marketplaces in North America.

To sum it up, Toronto is a great place to visit. It is a huge city, but it is friendly and very safe.