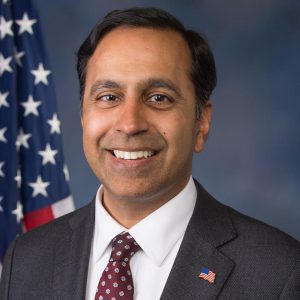 WASHINGTON, D.C. (Feb. 3, 2017) — In the largest act of congressional resistance to the Trump environmental agenda to date, U.S. Rep. Raja Krishnamoorthi (IL-8) led 30 co-sponsors in introducing a resolution calling on the Trump Administration to maintain the commitments the United States has made to addressing climate change and demonstrating a dedication to renewable energy through the Paris Agreement. The resolution, the first Krishnamoorthi has authored, highlights rising global temperatures, including 2016’s status as the hottest year on record, and the need for the country to address the enormous threat posed by climate change while embracing the economic potential of green technology.

“The reality of climate change is not up for debate, and its consequences must not be either,” said Krishnamoorthi. “As a country, we face the choice of denying this existential threat, and the economic potential of addressing it, or embracing the challenge before us through developing technology to ensure not only the health of our planet, but the enduring strength of our economy. If we abandon our commitments made in Paris, we will cede the leadership of the green economy to China and other nations.”