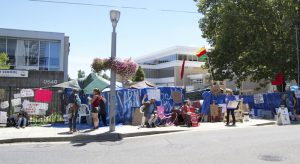 An ICE facility in Portland, Ore., has been shut down since last week because of protesters outside the building. (Eric Tegethoff)

Despite threats from federal officials earlier this week that the protesters could be arrested at any time, as many as 100 people have established tents in the makeshift encampment. The ICE facility has remained shuttered since last week.

Speaking at the camp, Luis Marquez, who has been part of the occupation since its second day, said he was disturbed by news of family separations at the southern border.

“I’m of Salvadoran ancestry, and I’ve detested American foreign policy toward Central America for as long as I can remember,” Marquez said. “But that aside, what brought me here was seeing babies ripped from their families who were just trying to come for a better life.”

A call to abolish ICE is among the protesters’ demands. Since Occupy ICE Portland began last week, protesters in New York City, Detroit, San Diego and other cities have also joined, marching and camping in front of immigration facilities and even halting hearings. The agency did not respond to a request for comment on these protests.

Last Friday, protesters gathered outside the Metropolitan Detention Center in downtown Los Angeles. Six days later, 12 to 18 people are still there, set up near the cells and blocking a driveway used by vehicles that take detainees into and out of the center.

Timothy Hayes with Ground Game Los Angeles, which is organizing the occupation, said he too was spurred into action by the Trump administration’s family separation policy. He said another spark for any activists is the white supremacist rally in Charlottesville last year that left one person dead.

“That has really lit a fire under a lot of people to be more directly confrontational and to not be so accepting of stuff that, sort of, we let slide earlier,” Hayes said. “There’s a lot of people I know that were Obama and Hillary voters who would have never thought, ‘abolish ICE,’ a couple of years ago or even a year ago. Now they’re really, really thinking it because they see how evil these tools can be.”

This sentiment is growing even among politicians. At least four members of Congress and 17 candidates running for office say the government should disband the agency. And this week, Rep. Mark Pocan of Wisconsin announced he would introduce legislation to shut it down.

Marquez said he’s heartened by the other “occupy” movements across the country and is committed to staying until the Portland facility is shut down.

“I can’t even watch the news anymore when I go home for the few hours I’m home because it’s crying babies,” he said. “I don’t know how people across this country can watch their nightly news and hear these stories and continue on like business as usual.”