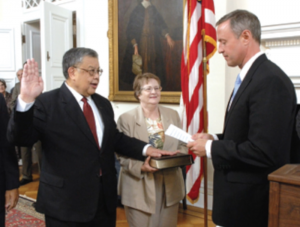 Ed Chow is sworn in as the Secretary of Veterans Affairs for the State of Maryland by Governor Martin O’Malley.

WASHINGTON, D.C. – OCA – Asian Pacific American Advocates mourns the loss of long-time member and advocate Edward Chow, Jr., who passed away peacefully at his home on July 22, 2016 of pancreatic cancer.

Chow’s career in public service began in the U.S. Army, where he received a Bronze Star for his service in Vietnam. After leaving the military, he served as a governmental appointee in Washington State, the federal government, and the State of Maryland, where he served as Secretary of Veterans Affairs for the State of Maryland.
A long-time member of the OCA – Greater Washington, DC chapter, he was a tireless advocate for veterans, diversity in all levels of public service, and all Asian Americans and Pacific Islanders. OCA and its Greater Washington, D.C. and Northern Virginia chapters recently held an event honoring his legacy and attended by luminaries such as former Maryland Governor Martin O’Malley, General Eric Shinseki, and Major General Antonio Taguba. 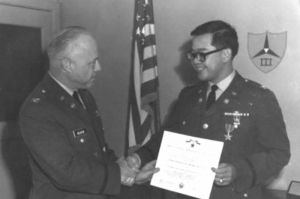 Ed Chow receives the Bronze Star for his service in Vietnam.

“It is with great sorrow that we announce the death of our long-time member, friend, and advocate, Edward Chow Jr. We send our deepest condolences to his family and friends in their time of mourning,” said Leslie Moe-Kaiser, OCA national president. “However, it is also with great pride that we look back upon Ed Chow’s innumerable accomplishments and contributions to the Asian Pacific American community. Throughout his career he encouraged Asian Americans and Pacific Islanders, women, and other ethnic minorities to pursue public service. He even went so far as to create a class to help guide others through the complex nomination and appointments process. Even as his time grew short, he continued to give back by taking the time to pass along the wisdom he had acquired over decades of public service to our most recent class of summer interns. His legacy will be measured by the deep imprint he left with his warm spirit and philanthropic nature, and his memory will not be forgotten.” 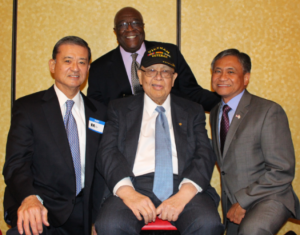 A Celebration of Life will be held at a later date. Interment at Arlington National Cemetery. Donations in memory of Ed’s life of service may be made to: Charlotte Hall Veterans Trust, 29449 Charlotte Hall Road, Charlotte Hall, Maryland 20622 (www.charhall.org) or Georgetown University’s Ruesch Center to support pancreatic cancer research (ruesch.georgetown.edu).