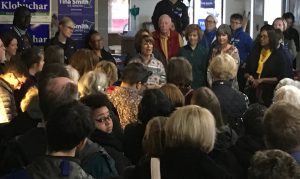 ST. PAUL, Minn. (Nov. 3, 2018) — U.S. Senators Amy Klobuchar and Tina Smith joined U.S. Rep. Betty McCollum (MN-4) Saturday morning to rally a large group of exceptional and determined Democratic constituents as they prepared to knock on the doors of nearby residents to, “Get out and vote,” on Nov. 6th.

McCollum, first elected in 2000 launched a high profile political career as a self-built leader as the second woman to enter the United States Congress for the state of Minnesota. Serving her ninth term, McCollum has dedicated much of her political life fighting for civil rights, seniors, women and children. At the top of her agenda are innumerable emphatic goals to uphold the former President Obama’s Affordable Healthcare Act, fight for increased support in Minnesota’s public schools and work towards holding national government officials accountable. Without a doubt, the energy between the three powerhouses, created an enthusiasm that was contagious.

Both McCollum and Klobuchar unequivocally endorsed Junior Senator Tina Smith as the first choice to fill the former U.S. Sen.  Al Franken’s seat. It was now incumbent upon constituents to roll up their sleeves and get to work encouraging St. Paul residents to get out and vote.

Smith also empowered self-identified DFL supporters to take back the U.S. Senate. Former Lieutenant Governor in 2014, Smith is well known for supporting farmers, ensuring fair and equal pay and fighting to keep Minnesota’s environment healthy and clean. While these noteworthy issues had volunteers huddled in a mass, ready to endorse, Smith’s biggest accomplishment includes passing the 2018 Farm Bill. The 2018 farm Bill promises to help protect farmers from going financially under when hit with natural disasters. It also hopes to encourage new and upcoming farmers to remain in farming, despite hardships.

Smith, McCollum and Klobuchar assured loyal constituents of their intentions to fight for all Minnesotans. Gifted with high abilities and a natural talent that connects with everyone and anyone in a predominantly Eurocentric, ethnocentric and male dominated context, Klobuchar also took the floor. Immediately, the distinguished senator had the crowd listening with bated breath.

Elected in 2006, Klobuchar confidently communicated hope and a vividly outlined political agenda for Minnesotans. Based on what she heard from her recent 2018, 87 county tour of the state, she assured those who came out to support her, that her commitment to Minnesota is unwavering. The senator’s high-energy speech was a clear indication to volunteers that, “Senator Klobuchar is ready to keep fighting for all Minnesotans.” 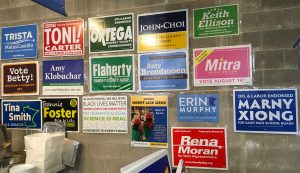 It’s no secret that Klobuchar has gained a powerful reputation as the, “Senator who doesn’t back down from a fight and gets things done!” Twin City volunteers were attentive as the poised and powerful senator communicated her unshakeable political platform. DFL constituents described her as having, “honorable values and ideals,” which manifest into real change. Her successful track record of fighting sex trafficking and elder-abuse undoubtedly reveals that creating change is in her DNA, despite party lines. She spoke with conviction about maintaining universal and affordable health care for all

Minnesotans and embracing racial/ethnic diversity towards inclusion. Finally, Klobuchar and the trio of dedicated and determined female politicians ended their speeches with a note of gratitude to everyone who has taken time out of their busy schedules to volunteer, knock on doors and work at the phone banks. In just a few days, DFL campaign offices will close down with high hopes that everyone gets out to vote and realize that every vote counts.