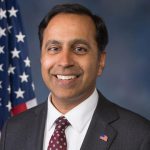 SCHAUMBURG, IL (Feb. 24, 2017) — U.S. Rep. Raja Krishnamoorthi (IL-8) on Friday issued a statement in response to reports that the shooting in Olathe, Kansas, which left two wounded and one dead, was specifically motivated by the race of two of the victims.

Witnesses to the shooting state that prior to opening fire, the attacker uttered racial slurs and yelled “get out of my country” at the two Indian victims, Srinivas Kuchibhotla, who was murdered, and Alok Madasani, who was wounded. A third man, Ian Grillot, was also wounded when he attempted to stop the shooter.

“The details of this attack have not yet been confirmed by police, but by all accounts, this appears to be an act of hatred,” Krishnamoorthi said. “Yesterday, a man opened fire in a crowded bar, shouting racial slurs and yelling for the two Indian victims to ‘get out of my country.’ Today, because of one man’s hate, another man lies dead and two others gravely wounded.”

“The two Indian victims, Srinivas Kuchibhotla, who was murdered, and Alok Madasani, who remains in serious condition, came to the United States to pursue their educations, to live, and to work,” Krishnamoorthi said. “This was an attack not only on the victims, but on the sense of security of Indians, Indian-Americans, and millions of other people of color across the nation. Along with so many throughout the world, I have always believed in the American Dream of our country as a place where regardless of where you come from, the color of your skin, or how you pray, you can build a better life. This shooting was a brutal, racial attack on two men, and on the fundamental values of our nation. It follows a spate of hate-motivated attacks on others in this country.”

“The same reports that have identified this shooting as an act of hate have also stated that the third victim, Ian Grillot, was wounded when he saw what was happening and heroically sought to intervene,” Krishnamoorthi said. “I urge my colleagues in Congress, those in the executive branch, and all Americans, to actively work together not only to prevent future attacks, but to directly address the underlying culture and climate which have led to them. Our thoughts and prayers must be with the victims today, but so must our actions.”