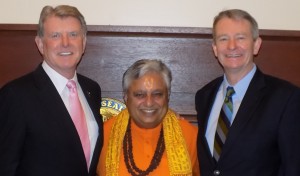 RENO (April 12, 2015) — Idaho Governor C. L. “Butch” Otter has issued a proclamation declaring April 1, 2015 as “Rajan Zed day” after the the Hindu statesman Zed offered the first Hindu invocation in the Idaho State Senate on March 3, amidst a public display of protest from some of the senators.

Three Idaho state senators reportedly refused to attend this Hindu invocation and one of them reportedly stated in a media interview: “Hindu is a false faith with false gods.”

The proclamation, issued in Lenore, Idaho, and carrying the Seal of the State of Idaho and signatures of Governor C. L. “Butch” Otter and Secretary of State Lawrence Denney, says: “…on March 3, 2015 the historical first Hindu invocation in the Idaho State Senate was read by Rajan Zed, President of the Universal Society of Hinduism.”

It add, “…Zed’s initiatives to bring various religious communities together throughout the world so that they can live in peace and mutual trust and enrich themselves through dialogue should be honored…”

The Proclamation also points out that Zed was being honored for his leadership in attempting to help the helpless. It adds that Zed’s work includes advocacy for the 15 million Roma (Gypsies) of Europe that live in apartheid conditions by frequently speaking about their maltreatment, issues and concerns; and urging other religious leaders to do the same.