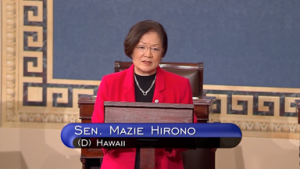 “Together, the expanded DACA and DAPA programs, will mean that around 5 million more individuals will be able to work legally, pay their taxes, and care for their families.

“Today, politicians—from Presidential candidates to sitting governors—appeal to our nation’s fears in arguing against any meaningful reform of our broken immigration system. Conjuring up shadowy images fuels these fears…Violent gang members from South America. Terrorists from the Middle East.

“In their divisive rhetoric and in their rush to build walls and close our borders, they neglect the faces of those they demonize. And they forget the facts.”

Hirono’s full remarks below, as prepared for delivery:

The most significant parts of the President’s executive actions were those intended to keep families together and give more people the opportunity to come out of the shadows. The President announced an expansion of the successful Deferred Action for Childhood Arrivals, or DACA, program. He also created a new Deferred Action for Parents of Americans and Lawful Permanent Residents, or DAPA, program. DAPA allows the undocumented parents of U.S. born children to stay in this country with their families.

Since its creation in 2012, DACA has given nearly 700,000 undocumented young people the opportunity to pursue their dreams through education and jobs. 60 percent of DACA recipients have been able to find new jobs—contributing to our tax base and economy.  Experts estimate that DACA recipients will contribute $230 billion to our GDP over the next decade.

Together, the expanded DACA and DAPA programs, will mean that around 5 million more individuals will be able to work legally, pay their taxes, and care for their families. While the President’s actions generated a great deal of support and excitement, they also generated opponents who challenged these actions in court.

These court challenges resulted last week in a Fifth Circuit Court of Appeals ruling that further delays help for these 5 million people in our country. As Judge Carolyn King stated in her strong dissent in the Fifth Circuit case, “a mistake has been made.”

The Administration is acting to swiftly appeal this decision to the Supreme Court. I am hopeful that the Court will find the President’s actions lawful, and that justice to millions of workers and families will eventually be served. We cannot continue to be inactive in Congress while millions of people remain in the shadows. Yet, here we are.

Today, politicians—from Presidential candidates to sitting governors—appeal to our nation’s fears in arguing against any meaningful reform of our broken immigration system. Conjuring up shadowy images fuels these fears…Violent gang members from South America. Terrorists from the Middle East.

In their divisive rhetoric and in their rush to build walls and close our borders, they neglect the faces of those they demonize. And they forget the facts.

The National Academies of Sciences recently released an authoritative look on how immigrants assimilate into the U.S. That report paints a very different picture than what you’ll hear from Republicans on the campaign trail.

For example, the Academies found that neighborhoods with more immigrants have lower rates of crime and violence than comparable nonimmigrant neighborhoods. Foreign-born men of working age are incarcerated at one-fourth the rate of native-born Americans. Today’s immigrants are learning English just as fast as past waves of immigrants—only our schools aren’t equipped to help them as well as they should be. 86 percent of first-generation male immigrants have jobs, as do 61 percent of women. In fact, immigrant men with the lowest education levels are more likely to have jobs than comparable groups of native-born men.

These facts paint a very different picture than gang members and terrorists. In fact, it is clear that immigrants are an asset to our communities.

The vast majority of people come to America seeking a better life for themselves and their families. They work extremely hard, and in many cases, under very difficult circumstances.  Despite our country being a nation of immigrants and the great benefits immigration has meant to our culture and economy, immigration remains a difficult issue in America.

Just last month we celebrated the 50th anniversary of the Immigration and Nationality Act of 1965.  Prior to President Johnson signing that law, the U.S. had a racially discriminatory quota system. In fact, prior to 1965, Asians were essentially excluded from immigrating to the U.S. The 1965 law wasn’t perfect.  But it moved our system forward by focusing on family reunification, not racial quotas amounting to racial discrimination, as a guiding principle.

Since the 1965 law, our nation has benefitted greatly from the millions of immigrants from all over the world who have come here. Immigrants have built vibrant communities, become titans of industry, expanded American arts and music, and strengthened our public institutions.

Their positive contributions have changed America, and what it means to be an American.

No matter how toxic the immigration rhetoric may be right now, we can’t stop pushing to improve our system.

President Obama’s executive actions were neither a complete nor a permanent solution for immigration reform, but they were positive steps forward.

It has been more than 2 years since the Senate passed its comprehensive immigration reform bill with 68 bipartisan votes. I was proud to have worked on this bill as a member of the Senate Judiciary Committee.

The House refused to even consider the bill—even after Republicans released their immigration principles acknowledging the brokenness of our immigration system. Congress remains deeply divided, and there is still no indication that we will be able to pass comprehensive immigration reform soon, leaving 11 million people in our country in the shadows.

As the only immigrant serving in the U.S. Senate today, I remember well my mother’s courage in bringing her three children to this country so that we could have a chance at a better life. That is what comprehensive immigration reform will mean to the 11 million people in the shadows—a chance for a better life for themselves and their families.

These are mothers, fathers, sisters, and brothers. These are neighbors and friends. They are not looking for handouts. They are looking for the chance for a better life. That’s the universal appeal of our great country.

As leaders, we need to act to make real for these millions of people the promise of America. We need to pass comprehensive immigration reform. I yield the floor.