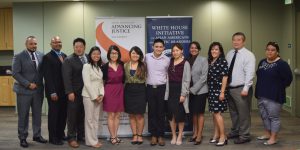 WASHINGTON, D.C. (July 29, 2016) — On Thursday the White House Initiative on Asian Americans and Pacific Islanders (WHIAAPI), which is housed within the Department of Education, participated in a media roundtable to discuss Deferred Action for Childhood Arrivals (DACA) and its implications for individuals of Asian and Pacific Islander descent.

In 2012, the Secretary of Homeland Security announced that certain people who came to the United States as children and meet several other guidelines may request consideration of deferred action on a case-by-case basis. They may also request work authorization. Deferred action is a use of prosecutorial discretion to defer removal action against an individual for a certain period of time. Deferred action does not provide lawful status.

WHIAAPI Senior Policy Advisor Reva Gupta presented information about the economic impact of DACA on the lives of recipients. “While AAPI community members may face barriers to applying such as fear, stigma, and a lack of awareness, it is also important that we are aware of the positive impact DACA can have,” Gupta said. “According to the Center for American Progress and the National Immigration Law Center, two out of three DACA recipients who are working have found jobs with better pay, which has translated into people being able to help their families financially. Over half of those with DACA have also found jobs that better fit their education and training. And overall, wages among DACA recipients have increased 45 percent.”

“Through this outreach session we aim to provide an overview of the DACA process so the AAPI community can make an educated decision about their immigration journey using official resources and services available to them,” said Martha Flores, Chief of Staff of the USCIS Los Angeles Field Office. “As always, we remind people to avoid immigration scams and seek legal advice on immigration matters only from those authorized to give legal advice. USCIS has many free resources available, in many Asian languages, for those who want to learn more about DACA. ”

“In the four years since its inception, DACA has brought great benefits to both recipients and the communities they call home,” said Sally Kinoshita, Deputy Director of the Immigrant Legal Resource Center, which leads Ready California. “Individuals with DACA report higher incomes, better jobs, and a sense of security that comes from knowing they are living and working without the constant fear of being torn from their families. But there are still many eligible immigrants from Asian countries who have not yet requested DACA and so are not reaping these benefits. We want to spread the word that DACA is still available and that it can bring life-changing opportunities to those who are eligible, which include many Asians and Pacific Islanders.”

Aman Thind, the Immigration Project Director at Asian Americans Advancing Justice-Los Angeles underscored, “Advancing Justice-LA is committed to providing free services to those who are qualified for the current DACA policy and free immigration screenings for those who wish to get more information about other forms of immigration relief. It is our goal to get the community information and services for any protection they qualify for so we can keep families together. We offer our services for free in an effort to prevent potential applicants from seeking assistance from unauthorized preparers who prey upon these communities for money.”

New America Media is the country’s first and largest national collaboration and advocate for more than 2500 ethnic news organizations. Over 57 million ethnic adults connect to each other, to home countries and to America through 3000+ ethnic media, the fastest growing sector of American journalism. Founded by the nonprofit Pacific News Service in 1996, NAM is headquartered in California with offices in New York and Washington D.C. NAM also partners with journalism schools to grow local associations of ethnic people around the nation.

Ready California is a collaborative campaign supporting California institutions and organizations to ensure that eligible undocumented Californians can access immigration relief while strengthening the statewide infrastructure to respond to future immigration reform.