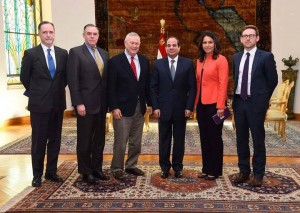 Cairo, Egypt (Nov. 23, 2015) — With Congress in recess until Dec. 1, U.S. Tulsi Gabbard (HI-2), a member of the House Foreign Affairs Committee, was in Cairo on Sunday to meet with Egyptian leaders.

Gabbard joined U.S. Rep. Dana Rohrabacher (CA-48), chair of the House Foreign Affairs subcommittee on Europe, Eurasia, and Emerging Threats. After conducting meetings in Paris with senior level government leaders in the wake of recent terrorist attacks there, the two traveled to Cairo, Egypt to discuss the threat of ISIS and Islamic extremist groups, how to strengthen the U.S.-Egypt relationship to ensure stability in Egypt, and the importance of religious freedom.

Gabbard and Rohrabacher first met with U.S. Embassy personnel and the U.S. Defense Attaché for a briefing on the current situation in Egypt and the Sinai, as well as an update on U.S. troops who are serving in the Sinai. Later the two met with Egypt’s President el-Sisi for over an hour and a half, followed by a meeting with Egypt’s Minister of Defense Sedki Sobhi. 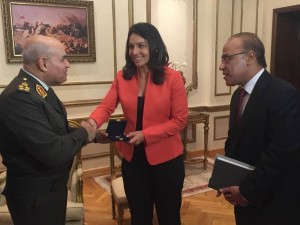 “We had a lengthy, candid discussion with President el-Sisi about how important Egypt’s stability and success is for the region and for the world,” Gabbard said. “He would like to strengthen and restore U.S.-Egypt relations so that we may work together urgently to ‘decimate’ ISIS and other Islamic extremist groups who pose a threat to us and to the world. The recent attacks in Paris and Mali are just two examples of the devastation these groups have caused.  President el-Sisi has shown great courage and leadership in taking on this extreme Islamist ideology, while also fighting against ISIS militarily to keep them from gaining a foothold in Egypt.  The U.S. must take action to recognize President el-Sisi and his leadership, support Egypt’s progress and stability, and stand with him in this fight against ISIS, al-Qaeda, Boko Haram, and other Islamic extremists who are our common enemy.”

The two also met with Rev. Andrea Zaki Stephanous, Ph.D., president of the Protestant Churches of Egypt, and other leaders of the Christian Coptic Church.  There are over 15 million Christians in Egypt, who say that after President Morsi attempted to foment religious bigotry between Muslims and Christians, resulting in churches being burned and Christians being threatened, they have more religious freedom now than in a generation.  They attribute this directly to the leadership of President el-Sisi, who has cracked down on Islamic extremism and made religious freedom a priority in his Presidency.