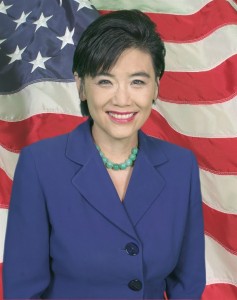 “One of the most remarkable things about America is that nearly all of us share a common bond of having immigrant roots. For many immigrant communities, including Asian Americans and Pacific Islanders (AAPI), the United States has served as a land of boundless opportunity, politically and economically. And in turn, America has thrived thanks to the hard work, ingenuity, entrepreneurship, and patriotism of wave after wave of immigrants. Nowhere is that more apparent than in my home state of California, where we are a majority-minority state and the world’s fifth largest economy. We are a daily example that welcoming immigrants contributes to a vibrant economy. And walking around my district, I can see, hear, and smell the influences from everywhere in the world.  From Chinese laborers who helped build the first transcontinental railroad to Filipino farmworkers who revolutionized the labor movement to Southeast Asian refugees who fled war torn countries to seek a better life in America, the rich heritage of AAPI immigrants is inextricably woven into the fabric of our nation.

“Unfortunately, as we celebrate the contributions of immigrants this month, we also must continue to fight the atrocities that the Trump administration is waging against immigrants each day. Hundreds of children seeking safety in the United States are being forcibly separated from their parents at our borders. This cruel separation is just one of the ways the Trump administration has dehumanized and isolated immigrants, in addition to calling them animals and spreading the lie that immigrants are more violent and dangerous. What the Trump Administration does not realize is that America benefits when people are welcomed and integrated into our society and given the chance to contribute to our economy. Even members of this Administration have relatives who arrived here not knowing a word of English, only for their grandchildren to rise to the highest levels of government. That’s what immigration means to our country, and we cannot forget it. During this Immigrant Heritage Month, let’s stand together in rejecting xenophobia and recommit to efforts that prioritize reuniting families, strengthening our economy, providing a pathway to citizenship, and ensuring that America remains a land of opportunity for future generations to come.”