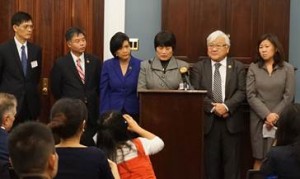 WASHINGTON, D.C. (Nov. 17, 2015) — Congressional Asian Pacific American Caucus (CAPAC) on Tuesday held a press conference to call on the Department of Justice (DOJ) to investigate the recent cases against Chinese American scientists who were wrongfully suspected of economic espionage.

Both Ms. Chen and Dr. Xi were arrested and indicted for various charges and suspected of economic espionage, only to have all charges against them later dropped. The press conference comes one day before a CAPAC meeting with Attorney General Loretta Lynch. CAPAC Members released the following statements:

Congresswoman Judy Chu (CA-27), CAPAC Chair:
“We came together today to let the Department of Justice know that Chinese Americans and Asian Americans are just that – Americans. Sherry Chen and Dr. Xiaoxing Xi are prominent scientists and U.S. citizens who became the latest victims of what appears to be a practice and pattern of the federal government profiling Chinese Americans as spies, jumping to arrest and indict them on charges in order to begin what can be called a fishing expedition for evidence. But while the charges can be dropped, the damage to careers and reputations remains. Worse, the growing perception that simply being of Asian ancestry or having ties to China can trigger an espionage charge is creating a culture of fear that makes Asian Americans feel unwelcome and afraid to pursue prominent careers. We cannot tolerate another case of Asian Americans being wrongfully suspected of espionage. The profiling must end. That is the message I sent to Attorney General Lynch during my questions to her at today’s House Judiciary Committee Oversight Hearing, in front of Dr. Xi and Ms. Chen. And it is a message we will deliver again when she meets with members of CAPAC tomorrow.”

Congressman Ted Lieu (CA-33):
“The United States is the most exceptional nation in the world. However, the cases of Sherry Chen, Professor Xiaoxing Xi and other similar cases remind us that our nation sometimes suffers from blind spots. The erroneous, dismissed charges of espionage leveled against Ms. Chen and Dr. Xi are the latest example of our government’s unfortunate inability to distinguish between American citizens and foreign adversaries. These cases illuminate a pattern and practice of minorities being singled out for arrest and indictment by federal officials. Such practices are unconstitutional and un-American and must be urgently addressed by the Department of Justice. It is the solemn duty of any government agency to adequately protect the civil rights of all American. In light of the needless, careless damage done to the livelihoods and reputations of Ms. Chen and Dr. Xi, the DOJ owes them – as well as the American people – a guarantee that these injustices will not happen again.”

Congressman Michael Honda (CA-17), CAPAC Chair Emeritus:
“Today, I was proud to stand with Dr. Xi and Ms. Chen  in their fight for justice and fair treatment of all Americans regardless of race or ethnicity. It truly takes courage and strength of character to continue to stand up after the wrongdoings and injustices they have endured. This issue is much larger than the stories of these two brave individuals. They are courageously sharing their stories so that we might shine a light on a pattern of upstanding Asian Americans being falsely accused of espionage solely because of their race or ethnicity. My colleagues and I won’t let the experiences of Dr. Xi, Ms. Chen, and others go unnoticed or be swept under the rug. I call on the Department of Justice to heed our call and conduct an independent investigation into whether race or ethnicity played a role in their arrests. Furthermore, I call on both the National Oceanic and Atmospheric Administration and Temple University to fully reinstate Ms. Chen and Dr. Xi to their former positions without reprimand or reprisal and provide each of them with a formal apology.”

Congresswoman Grace Meng (NY-06):
“We are here so that we can prevent the injustices that happened to Sherry Chen and Dr. Xiaoxing Xi from ever happening again. Sherry Chen and Dr. Xi, two  American citizens, were accused of espionage by federal officials even though the DOJ and FBI did not do enough research before making these accusations. A practice of targeting Chinese Americans for espionage crimes based on their background is unacceptable. Nobody should live in fear of being persecuted for crimes they did not commit, solely based on their ethnicity. No American should live with this fear. We must fight against institutional biases where they exist, especially within the federal government. The pattern of targeting investigations of Chinese Americans on the basis of national origin fundamentally goes against the basic civil liberties owed to every American citizen. I join my colleagues today urging the Department of Justice investigate whether ethnicity was a factor in prosecuting these citizens and hope that the Department of Justice will establish and enforce internal procedures against racial profiling so that we may prevent cases like these from happening in the future.”