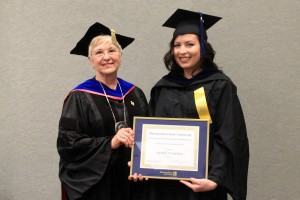 ST. PAUL (June 26, 2013) — When Rachelle Erickson legally “emancipated” from her mother as an 11th grader, one might suspect challenging times ahead. Yet the Stillwater resident has not only survived but thrived.

“It’s a huge deal” to receive her graduate degree, said Erickson, now 26.  “My experience made me stronger and more determined. It made me realize if you want anything, you have to do it on your own.”

The Vietnamese-American is a full-time corrections officer at Minnesota Correctional Facility-Oak Park Heights and a part-time officer at the Ramsey County Jail.  Erickson also serves as a reserves officer for the Stillwater Police Department.  She previously worked at the Lino Lakes and Stillwater correctional facilities.

Emancipating from one or both of your parents is rare.  Because of her mother’s instability, a court order granted Erickson the status of adulthood at age 17, because she demonstrated the ability to financially support herself.

While attending UMD and Metropolitan State, Erickson was active in community service.  She volunteered at the Wildlife Rehabilitation Center, Roseville, participated in Minnesota’s Walk for MS and contributed to a memorial dinner that paid tribute to fallen U.S. Marines.

Future plans for Erickson include completing an accelerated law enforcement certificate program at Metropolitan State and then passing a test to serve as a licensed peace officer in Minnesota. Eventually, she hopes to work on domestic violence and child-abuse neglect cases.