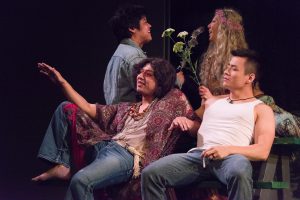 MINNEAPOLIS (April 20, 2017) — Now into its second week of a month-long production through April 30 at Mixed Blood Theater, the refugee comedy drama with a message, “Vietgone” is having as great a run as the 2017 Lucille Lortel award winning play has had on the east and west coast, according to its veteran cast members.

“Vietgone” is playwright Qui Nguyen’s story that is based on the experience of his parent’s immigration/love story of meeting at an Arkansas refugee center after escaping the fall of Saigon in 1975. It is a journey that starts from nothing as war refugees and strangers who takes a wild ride as they adjust to a new life in a new land during scary but beautiful times. With humor and action audiences get to know Nguyen’s parents and their story through their son’s eyes, in a fun and satirical way.

Vietgone is directed by Mark Valdez, whose skill with comedy serves the play, infusing humor and wit in a raunchy, but fun and good hearted way.

Nguyen gave the Mixed Blood production his permission to add comedic elements to the characters.

“It is a must-see,” said Chomet, describing the production as a groundbreaking theatrical experience. “It takes Asian American theater to a new level, combining hip-hop, martial arts, rom-com, satire, a comic book sensibility, and incredible complexity and deeply moving story in an unbelievable way. The audience loses their mind every night. They love the ride.” 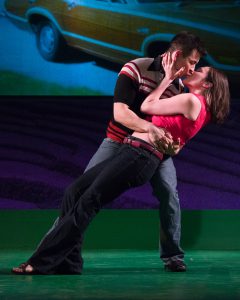 David Huynh and Meghan Kreidler in a scene from “Vietgone.”

David Huynh is the central character of Quang, a fearless and grounded pilot and father.

Huynh is a first-generation Vietnamese-American actor. His own family story closely resembles the story of Vietgone. His mother emigrated to the U.S. in 1968, and his father was a soldier who fled after Saigon fell and continued his boyhood job as a commercial fisherman on the Gulf Coast.

“The circumstances that brought them here and allowed me to be born are extraordinary,” Huynh said. “It (Vietgone) feels like ‘our’ story.”

Huynh studied theater arts at the University of Louisiana, spent a summer with the Moscow Art Theatre, and then earned a Master of Fine Arts from the University of Houston Professional Actor Training Program. Huynh speaks English, Vietnamese and French. He went onto to New York where he landed many traditional roles.

“If you had told me even two years ago that a play about Vietnamese refugees was going to be produced across the country, I wouldn’t have believed you,” Huynh said. “This play is the unicorn that puts refugee stories in their perspective center stage. It’s a play about Vietnamese people written by a Vietnamese-American playwright. We’re not side characters.”

A play about the Vietnam that doesn’t use the people or a war as a backdrop is rare, he said. The Asian characters you see are complex human beings with complete arcs.
“When I saw that Mixed Blood was casting, I had to submit and see if I had a shot to be a part of what I knew would be a special production,” he said. “Despite mostly Western classics (Shakespeare) comprising my professional stage experience, I couldn’t let an opportunity like this pass by.”

Huynh was attracted to Vietgone as a moving story that also takes a stance on the Vietnam War. The story offers a South Vietnamese (Republic of Vietnam) perspective on what the war was about, why they fought, and what American involvement really meant, he said.

“I think many of us have a black and white view on the Vietnam War and how it ended, but this play makes us unpack the grey area in between,” he said. 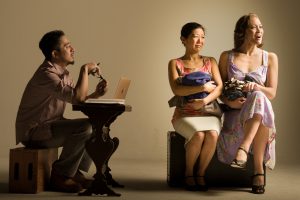 The story has relevance today with the refugee crisis in the Middle East and the tense racial climate in America, he said.

Chomet said that with the travel ban and the ban on Syrian refugees in particular, Vietgone is a reminder that it was not so long ago that the United States took pride in being a haven for refugees escaping unimaginable war and unbearable circumstances.

This is the first production of Vietgone under a new director. Valdez has lead a team of designers, crew and actors in putting together an ambitious play for Mixed Blood’s 200 seat theater.

Huynh said that the play is that it does not preach a message, but the show highlights issues in unexpected ways.

“I don’t want to spoil anything, but it turns stereotypes and tropes upside down for humor and to let us examine it in a different context,” he said.

Chomet agreed, saying that “audiences are as excited as we are because it is a truly fun night of theater.”

Admission options include Through Radical Hospitality, or free on a first come/first served basis starting two hours before every show. Advanced reservations are available online or by phone for $25.