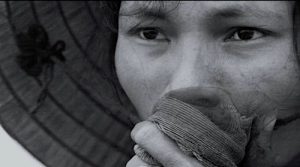 A scene from The Vietnam War, the Ken Burns documentary series for PBS.

The Vietnam War, Ken Burns and Lynn Novick’s ten-part, 18-hour documentary series, will premiere September 17, 2017 on PBS. It tells the epic story of one of the most divisive and controversial events in American history. Burns and Novick spent 10 years making the movie and it includes testimonies of nearly 80 witnesses from all sides—Americans who fought in the war and others who opposed it, as well as combatants and civilians from North and South Vietnam. NAM editor Andrew Lam, who came to America at the age of 11 from Vietnam at the end of the war, interviewed them. Lam’s father, Lam Quang Thi, a lieutenant general in the South Vietnamese army, was interviewed in the film.