Pham, a 1993 graduate of Osseo High School, is in his 10th season as the Tommies head coach. The Tommies, who won their last 35 matches in a row, not only captured the school’s first national title, it also became the first team from the Minnesota Intercollegiate Athletic Conference to win the national championship in volleyball. They finished the year 40-1.

“To be down two sets, in that environment, and to be able to pull out  the win speaks volumes about our girls and how much they wanted it,” Pham said. “They’re just fighters. They fought through it. I couldn’t be more proud.” 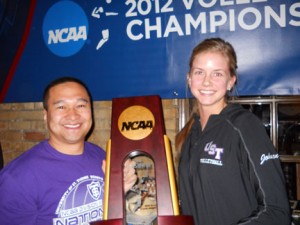 Pham, who wrestled under Osseo coach Ken Droegemueller at Osseo High, has built a successful volleyball program at St. Thomas. He has been voted MIAC Coach of the Year in 2005, 2007 and 2008. UST has had the conference Player of the Year in five of his eight seasons. Two of his former players are now head coaches in the conference – All-Americans Jane Gibbs (Augsburg) and Rachelle Dosch (Gustavus).

Pham, who has 15 years of college coaching experience in the Minnesota Intercollegiate Athletic Conference (MIAC), was named UST head coach in April 2003. His nine-year record with the Tommies is 248-62, including six MIAC titles and seven NCAA playoff berths.

The 2012 Tommies managed to make school history not only by their athleticism, but also by their nerves of steel and an unsurpassed will to win. Nicknamed the Comeback Kids, the Tommies had several come-from-behind wins in the MIAC tournament, including the semifinal match against Carleton when they were down 4-10 in the fifth and deciding game and rallied to win.

The come-from-behind win in the national championship match seemed like a fitting end to their magical season.

“This team won 40 of 41 matches this year and won the national championship but it’s not the most talented team I’ve had,” Pham said. “I had teams with more talent but this team is stubborn and it refuses to lose. I watched some of the matches when we were down, and I said, ‘How did we win this?’ This team is gritty.”

Pham has also worked as a Junior Olympic coach for more than a dozen seasons, with the latter years as head coach at Minnesota One, and of the Wayzata 17-1s. He also has served as the Wayzata Middle School volleyball coach, and has a background as a camp instructor and clinician.

Pham has a master’s degree from St. Mary’s University in Minneapolis, and previously worked as a math teacher in the Wayzata school district. He is the third child of Mr. Yen Pham, who is the Executive Director of Vietnamese Social services of Minnesota and Mrs. Nguyên Thi Xuan.