Saigon-Houston Radio: ‘Our community rescued itself when Harvey came’ → 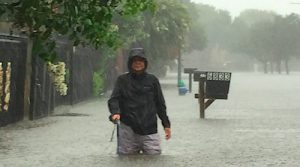 SAN FRANCISCO (Aug. 31, 2017) — Thanh-Thuy Vu is owner of Saigon Radio KREH 900-AM, the only full-service, full-time Asian station in Greater Houston. For the city’s nearly 40,000 Vietnamese residents, and for many more in Greater Houston, the station is a central hub for news and information and is now playing a central role in helping to direct rescue efforts amid the devastation of Hurricane Harvey. NAM Editor Andrew Lam interviewed Vu about how the station is weathering the storm. Below is a translation from the original Vietnamese.

How is the Vietnamese community responding to Harvey?

There are many Vietnamese in Houston, and many of them own boats. People live near lakes and near the ocean so a lot of them fish on the weekends and have boats at the ready. Many are volunteering to help rescue others, from as far as Dallas, New Orleans and other cities. There was a Vietnamese man from Dallas. He called our station. He bought a boat on Friday. By Saturday, he was already in Houston to help rescue people. It was quite amazing!