SAN FRANCISCO (March 18, 2014) — As the 40th anniversary of the end of the Vietnam War approaches, photographer Robert Dodge offers us a compelling new view of Vietnam, my homeland, in his new book of photography: Vietnam 40 Years Later.

Below is the foreword that I wrote for that book.

Four decades have passed since the last U.S. helicopter carrying refugees flew away from a Saigon in smoke, but still the ember smolders. Vietnam is no longer a war, of course, but it remains for many Americans a scar and a haunting metaphor for political disasters and tragic consequences. It evokes memories of napalm, carpet-bombings, burnt-out houses, dead civilians in black pajamas and army helicopters hovering over wounded GIs in rice paddies. And gripped by that ignominious past, Americans often regard my homeland through the eyes of the culpable. 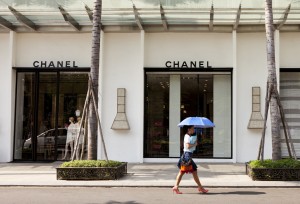 The country called Vietnam, on the other hand, has freed itself from that historic moment. Its population has passed 90 million, more than doubling since the war ended. Fading from living memory and into history, the war is a subject barely talked about. Vietnam, in any case, waged another war in Cambodia in 1979 and occupied that country for the next 10 years. It also fought against the Chinese in 1979 and won. A few years ago, when I asked a young man on the streets of Hanoi how he felt about “the war,” he looked perplexed. “Which war, uncle?” he asked. “We had around six last century.”

Vietnamese, in fact, don’t like to talk about wars. They’d rather talk about business and job opportunities, and the goings-on of their families. Full of young, energetic people, the country is rushing at breakneck speed toward modernity, and its gaze is relentlessly forward.

In a sense, Robert Dodge’s Vietnam 40 Years Later is a counterbalance to the long-held American view of my country. Dodge, who visited Vietnam nine times in the last decade, has witnessed an enormous change there: rice paddies replaced by condos and golf courses, sleepy fishing villages turned into luxury resorts, old markets transformed into slick, marbled shopping malls.

Indeed, this volume’s cover photo itself captures something of the current motif of Vietnam: movement and change. A lone baguette vendor in a strikingly red jacket sits immobile against a blurry river of people on motorcycles. But her immobility is deceptive. Despite her traditional conical hat, despite her stillness, the bread-seller wears modern clothing, down to her Western-style purse. She too, in a sense, wants to move forward. And given that there are 145 million cellular phones for Vietnam’s 90 million people — or about two for every adult — it wouldn’t be at all surprising if she, in the next frame, were to take one out from that purse. 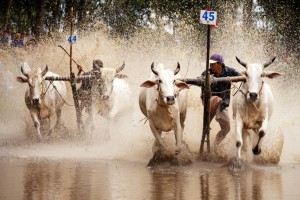 Modernity, that is to say, seeps in. You can see it as a river of motorcyclists rushing by while above them looms a Starbucks sign. Or take a look at the farmer standing in his bare feet on the verdant slope: Two oxen graze nearby, but he is preoccupied with chatting on his cell. Or consider the new cityscape of Saigon, my birthplace, now renamed Ho Chi Minh City, with its high-rises being constructed — and see the once-sleepy town of villas and lycees and tree-lined boulevards transforming itself into a bona fide 21st-century metropolis.

What can we discern from Vietnam 40 Years Later? That first and foremost, Vietnam is an active verb. In it, people work and they work hard. In the following pages, you will see Vietnam as a country powered by backbreaking labor — factory workers, fishermen, farmers, market vendors and cyclo drivers — something that has never changed. And women, more often than not, work even harder than men: See them carry baskets of salt, see them row boats to the market, see them sell fish and flowers, see them harvest rice.

But to the discerning eye, there is a growing schism between the haves and have-nots. There’s a Vietnam that is moving toward a conspicuous consumerist culture, a new upper class living a grand life with armies of servants waiting on them hand and foot. Then there’s a Vietnam that remains mired in poverty, one in which millions live hand to mouth.

The photo of the young woman in red stilettos walking past the Chanel store in downtown Saigon, for instance, stands in contrast to the image of the tribal woman making sticky rice in her ramshackle mountain home. A purse in that Chanel store could easily purchase 10 impoverished children in the Mekong Delta, where desperate parents have been known to sell their daughters across the borders to human traffickers — for a mere $400. Indeed, despite enormous changes and economic progress, there’s a gigantic gap between those who work to survive and those who own villas and fly overseas to shop ‘til they drop. In the age of raging red capitalism , Vietnam is a country of humiliating poverty and extraordinary if increasingly unwarranted wealth.

What else? Vietnam is a world in motion, in flux. You can see this simply by looking at Dodge’s gorgeous photograph of the gigantic billboards that line the bank of the Bach Dang River. They have phone numbers on them; they are waiting for potential marketers — Tiger Beers, Starbucks Coffee, Sanyo — to place their ads. You can see it in the fashion show that the upper class enjoys, the nouveaux riches applauding the model flourishing her red skirt into a blossoming hibiscus on the catwalk. You can see it in the gigantic crane at the dock lifting a forklift truck to shore. And you can see it in the stylish entrance of the brand new Melbourne-based RMIT university campus, which recently opened in Vietnam to offer programs from business and management to design and micro-engineering.

Yet still, in Dodge’s photos, I am heartened to see that my homeland remains as much a breathtaking beauty as she ever was. She’s made of majestic mountains shrouded in the morning fog, of sand dunes under tropical sunlight, of limestone karsts and isles, and she’s shaped by the eternal sea lapping at her shore. And she is not always about work: She’s also made of smiles and laughter, of leisure and of celebrations. The temples and churches are always full of worshippers on religious holidays. Over food and drinks, fishermen gossip and chat after a hard day’s catch. For Tet, the Lunar New Year, parents and children dress up and walk the streets in jubilation. And it is a statement on Vietnamese spirituality and a deep sense of aesthetics and religiosity that flowers are always in high demand at the market.

My two favorite photos: A Buddhist monk sits on the tile floor, smoking a cigarette. He peers out to a bright world through a door ajar, the smoke drifting lazily. Part of his saffron robe, lit by sunlight, seems like it is made of fire itself. And there’s the gorgeous image of the oxen race of Chau Doc in the Mekong Delta. The oxen are harnessed together in pairs. Team 45 is leading, team 44 catching up from behind. The muddy water splashes upward, a rising curtain in blistering sunlight; see the enviable joy on the racer’s face.

For Dodge, no doubt, it is a difficult task to pick from the thousands of images he took in my country. What to leave out? Gay lovers? Internet cafes? Sidewalk prostitutes? Street protests against an authoritarian regime? Luxury resorts and beaches? What about the new McDonald’s that just opened? Or that beauty weight-lifting contest? After all, anyone who wants to describe Vietnam knows that one cannot fully chronicle a raging river. The complexity of Vietnam will always elude efforts to capture her.

Vietnam 40 Years Later is people-centered, however, to its credit, and thereby manages to depict a new historical moment: a country at a crossroads, one that is part of the global society and yet, like the farmer talking on the cell phone, one that still has its feet in the mud.

That a book of photographs narrates the human dimension of Vietnam at an important historical juncture is, therefore, very welcome. No doubt it will help loosen the grip that wartime memories have on those who still hold tightly to the “What we did to them” lens. At the very least, Vietnam 40 Years Later should help expunge images of napalm and burnt-out villages and dead soldiers. Let it be known that after the B-52 bombs fell, life goes on — indeed, thrives. The craters have, after the monsoons, turned into ponds in which farmers raise fish, and in which ducks and children swim; the broken wings of a downed airplane have become rusty bridges across small rivers, connecting neighbors and villages.

Franz Schurmann, well-respected historian, sociologist and world traveler, once observed that you cannot fully understand a society unless you watch “lives lived every day.” That is, the way to understand the dynamic of nations is not simply to eavesdrop in the corridors of power, but to chronicle and detail the energy and movements on the street. “The collective soul of the people gives direction to the nation,” he said.

Applaud the photographer, then, for his unwavering curiosity as he navigates the neighborhoods and streets and cities and landscapes of Vietnam. Admire these photos, and see them as snapshots of an unfolding epic. See them, if you will, as an invitation to travel, to see Vietnam of the here and now, and as a topography of a once-wounded nation, now healed; a barely discovered country.

Andrew Lam is an editor with New America Media and author of the “Perfume Dreams: Reflections on the Vietnamese Diaspora,” and “East Eats West: Writing in Two Hemispheres.” His latest book is “Birds of Paradise Lost,” a short story collection, was published in 2013 and won a Pen/Josephine Miles Literary Award in 2014.