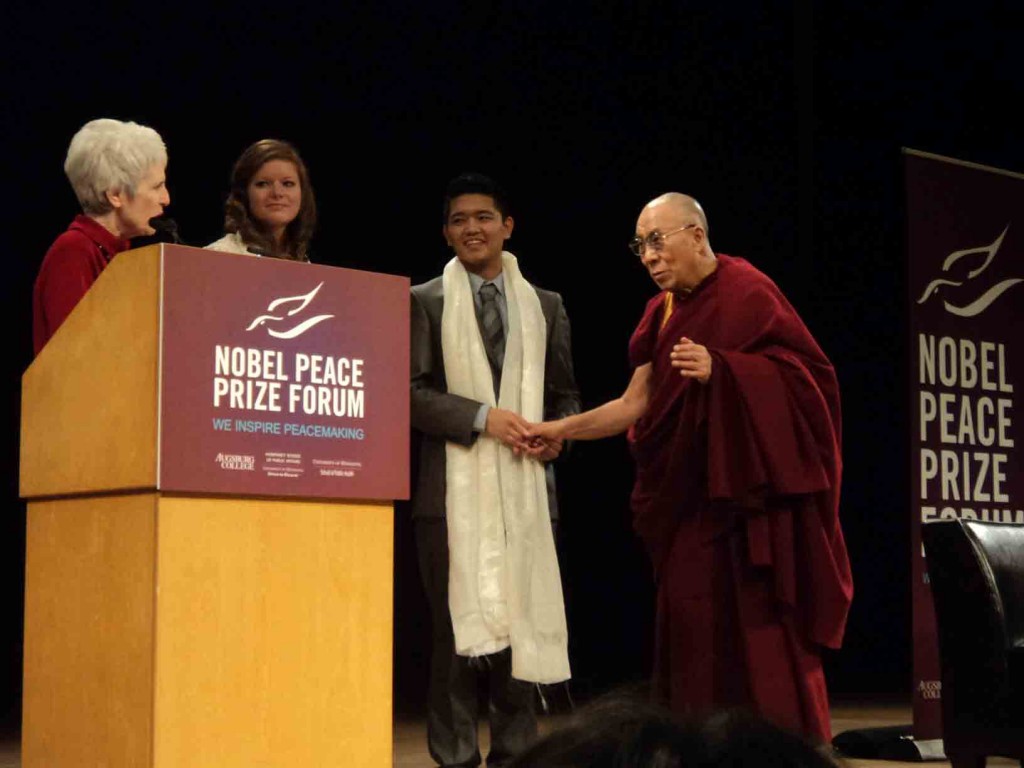 MINNEAPOLIS — Last weekend we were reminded of the precarious world in which we live, prior to being allowed to cover the lecture by His Holiness the 14th Dalai Lama, Tenzin Gyatso, one of the most illustrious peace leaders in modern times, we were required to request our media credentials well in advance and have them cleared through the US Department of State.

Upon receiving clearance we were cautioned credentials were non-transferable. Media entered the Minneapolis Convention Center at 6:30 a.m., and 3 hours prior to the the event’s start, our identification was checked and all camera equipment was required to be in the media gallery prior to the security sweep at 7:30 conducted by US Department of State and their dogs.  Furthermore, we were reminded that if we left we would not be able to return. This reality pulsated with the confrontations throughout the world prior and shortly thereafter the presentation of His Holiness.

The presentation was just a few days after the Russians invaded several airfields in Crimea and raised their flag in key Ukrainian strong holds.  Also not even 24 hours after his presentation, there was a horrific outburst of violence who according to the Chinese Communist party was carried out by ethnic Uighurs, many of which are opposed to the Chinese government, The knife wielding jihad attack at the train station in Kunming, China killed 29 and injured more than 100.

Upon completion of the security sweep the emptiness of the of the Minneapolis Convention Center during its early morning hours was soon replaced by several thousand eager attendees aside who aside from Tibetans, there were people from all cultures ages, and denominations gathered to listen to His Holiness. Patiently, the thousands of guests made their way through security rushing to find a good seats, little by little the seats filled in what was a near sold out lecture.

“We are going to examine how faith relates to conflict throughout the world” We believe controversy and conflict should be brought forward in a positive way.” NPR’s Cathy Werzer moderated. Richie was elated as he mentioned the Nobel Peace Prize Forum would forever be housed in the place we call home, Minnesota. Through Google Plus the lecture was broadcast to 50 nations..”Crossing boundaries to to create common ground…” The presenters encourage us to strive to find says to create commonality. The moderator continued that the Nobel Peace Prize Forum was born in 1989, its supporters included for Vice President Mondale and Governor Al Quie.

The program opened with traditional song and dance by a Tibetan men’s group and a performance by Tibetan female dancers. The dancers were from the Tibetan American Foundation of Minnesota. The stage was now set for the remarks of His Holiness. College student Anastasia Young was afforded the honor to introduce 1989 Nobel Prize Winner. His Holiness noted he considered himself 1st Tibetan, then Buddhist and noted that this attitude has created much anxiety for him  He talked about how he is easily able to communicate with the audience so in that  way touching each other’s heart, at a human level.

Despite recent events, Dalai Lama urged us to have hope in humanity. For example, when asked how he transcended despair “ There is no other choice” He acknowledged that his optimism was founded in a reality and not foolishness. He went on to mention that it is important to keep a fresh mind, “If you want to die soon, meditate on pessimism”. he cautioned.

However, he also noted that man is a social animal and often qualities of greed and aggressiveness manifest themselves. “No concern of other’s pain, other’s rights or other’s life.” He felt we need to focus on aspects of humanity that are similar across faiths as we dialogue and not to place too much emphasis is placed  on religion because then things become too narrow. We must learn of the various traditions and learn to appreciate different views, he urged as he compared the various philosophies to a supermarket noting that we benefit from variety.

According to The Dalai Lama, the world is getting better. He felt despite many events of violence throughout the world, things in this century have actually gotten better. People are now concerned with with such matters as the environment.   Humans have become more mature noting fewer conflicts and an emphasis on demilitarization among many of the world powers. The basis of our hope is in the hands of our young people,he continued, noting that he sees education, commitment and a sense of oneness among many of the young people.

When asked how we should bridge the divide between us and those not ready to seek peace, he urged us to keep our emotions from getting out of control and we should develop a long-term plan, “ Education is a key factor” and educated people are more compassionate. Yet, at the same time, he was critical of the education system noting that education only talks about material success “Modern society is resistant to culture, to real life.” He pointed out that the the good qualities have become dormant and we need to show affection to others.

Dalai Lama noted scientists recognize that peace of mind is very important as are the concepts of a happy individual, a happy family and a happy community. Scientists have found that hatred damages the immune system and that compassion and self-confidence are far better for the heart tan fear, hatred and jealousy. If there are too much differences then there becomes lying, bullying and finally killing, Every person has the right to achieve a happy life.

“Each person’s future depends on humanity”, He went on to talk about the importance of the sense of oneness. We all grow from our mother’s affection and we need to show affection to others he commented.

His Holiness with a knack for sprinkling humor in his deep remarks noting that he really had a deep liking for honey and from the Buddhist perspective he was perhaps destined to become a honey bee in his next life. However, he went on that this possibility seems to have been put to rest as doctors reminded him that excess sugar was not healthy thus he has greatly his consumption of honey and other sweets.

He further mentioned we need to be able to separate the action from the individual. “As time passes, your enemy can one day be your friend” Forgiveness does not mean that you accept the wrong doing but rather that you have the ability to differentiate between yourself and the wrong doing, you have to be willing to confess your wrong action.

When asked what we could do to move humanity forward and where to start he continued on this on vein of thought. “I don’t know, “. he started continuing that we must start from the individual follow the compassion of inner values . . . then your family, 100, families, 1,000 families.

Any change must start from the individuals, there is no other way, start with yourself”.