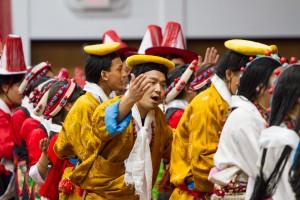 Losar, the most important holiday for Tibetans, means new-year. The 15-day celebration marked the beginning of a fresh start for the humbled Tibetan guests. The celebration offers the Minneapolis community an opportunity to collectively contemplate and draw on hope, while listening to the heart and wisdom of the Dalai Lama.

His Holiness presided over the celebration, which was considered to be a deeply cherished and revered ceremony.

“We feel blessed to have His Holiness present amongst our community for the Losar celebration because this is a once in a lifetime opportunity for our community,” said Namgyal Dorjee, president, Tibetan American Foundation of Minnesota.

The TAFM along with Augsburg College joined efforts to host an amazing and unforgettable ceremony that inspired people into the Tibetan New Year.

Stephanie Weiss, Director of News and Media Services and Jodi Collen, Director of Event and Conference Planning were blessed with white scarves, which symbolizes gratefulness to leaders as well as hope. Teary eyed, Weiss was touched.

“I’m surprised because I didn’t expect what the day would bring,” Weiss said. “It’s an incredible honor.”

This was the first time since his 1959 exile from Tibet that the Dalai Lama celebrated Losar outside of India. A recipient of the 1989 Nobel Peace Prize and global spiritual leader, the Dalai Lama refers to himself as homeless.

Tibetans of Minnesota and the Augsburg College community whole-heartedly welcomed His Holiness.

The Tibetan American Foundation of Minnesota (TAFM), along with Augsburg created a peaceful, welcoming and friendly space filled with traditional Buddhist artifacts and an abundant assortment of fresh flowers.

Members of the TAFM and president Mr. Mendel Tensum offered reverence with an offering preceding the Dalai Lama’s presentation. His Holiness addressed the audience for 45 minutes, and encouraged the Tibetan community of Minneapolis to strengthen efforts to decrease global violence, increase peaceful conditions and practice thoughtful reflection.

The message from the Dalai Lama reminded the audience that, as humans, we are highly capable of compassion and love, but also anger and hostility. He encouraged attendees to hold tightly to cultural traditions that respect and honor all people. With strong faith and conviction, he promoted peace as a prevention to conflict. With many smiling children in the audience, parents seemed to enjoy his wise words and gentle approach. Most were simply in awe.

The peaceful family and Tibetan community celebration provided many poignant and promising messages. Consequently, those who gathered seemed uplifted by the traditional Tibetan music, dance performances and of course,

The Dalai Lama’s rich message about restoring and maintaining compassion. The TAFM priority is to preserve and pass on to their children the cultural heritage that the Dalai Lama spoke of on Losar.

The Tibetan perspectives related to the celebration of Losar reminded the audience to benefit from thoughtful insight, extend love, default to compassion and deepen practices that communicate kindness.

From this viewpoint, those who attended the Losar celebration openly communicated that it was an incredible honor to hear His Holiness speak and to be part of such a joyous and special occasion.