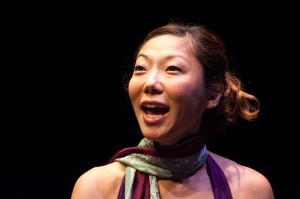 Sun Mee Chomet performing a scene from her critically acclaimed one-woman show, “How to be a Korean Woman” at the Guthrie’s Dowling Studio. (Photo by Aaron Fenster)

Directing and dramaturgy by Zaraawar Mistry, How to Be a Korean Woman is a hilarious, heartfelt, and personal telling of Korean-American adoptee Sun Mee Chomet’s search for her birth family in Seoul, South Korea.

This poignant one-woman show – told from the perspective of an adult adoptee – uses text, music, and movement to explore themes of family, love, adulthood, motherhood and the universal longing to know one’s past. Follows sold-out performances at the Guthrie’s Dowling Theater.

Tickets are $18, and $15 for students and seniors. www.sabesjcc.org