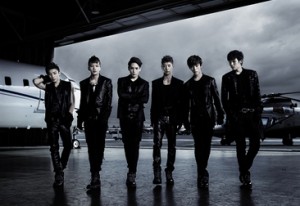 Last year’s viral juggernaut, “Gangnam Style,” helped introduce Korea’s infectious brand of pop music, dubbed “K-pop,” to the western world. For many, the hip-hop influenced song represented a brand new musical experience. However, you might be surprised to know that the relationship between hip-hop and K-pop isn’t all that new.

Beginning in the early 1990s, Korean artists began incorporating elements of rap and hip-hop into their music; spawning a melodic hybrid that would define the modern K-pop sound. Over the past decade, hugely popular acts like JYJ, Wonder Girls and Girls’ Generation have collaborated with the likes of Akon, Kanye West, Ludacris and Snoop Dogg. More recently, major Korean record companies have recruited leading hip-hop stars, such as will.i.am, to write and produce songs for their top artists.

One of the latest (and hottest) K-pop groups to epitomize this incredible cross-cultural fusion is B.A.P, whose members cite 50 Cent, P. Diddy and Pharrell as some of their influences.

In May, B.A.P will embark on its first North American tour by headlining the 2013 Verizon APAHM Tour, an annual concert series that celebrates Asian American Pacific Islander Heritage Month. Although tickets for the tour are sold out, there’s still a chance for you to see (and meet) B.A.P. Verizon is offering fans a chance to win a round trip and accommodations for two to catch the group at an APAHM Tour city of their choice with exclusive V.I.P. access.

Formed in 2012, B.A.P, which stands for “Best Absolute Perfect,” quickly rose to the top of the Korean pop charts with hit singles like “Warrior,” “Secret Love” and “Power.” Earlier this year, they found even greater international success with the release of their latest album, One Shot, which debuted at No. 1 on iTunes’ Top 10 Hip Hop Albums in the United States, Canada and New Zealand, as well as No. 1 on Billboard’s World Albums Chart.