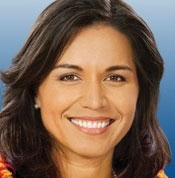 Gabbard’s statement comes after Friday morning’s test of a wailing attack warning siren across the state of Hawai‘i that is designed to alert residents and guests of an impending nuclear attack by North Korea. The warning tests will continue to be conducted on the first business day of every month.

“December 1, 2017 will forever mark a dark day for Hawai‘i, for our country, and the world. Today marks the first day of a new era, in which the lives and future of the people of our state have indelibly changed, as they’ll be reminded every month with nuclear warning siren tests that at any moment, we, our children, our families, and our precious ‘āina will be vulnerable to a nuclear attack from North Korea — with mere minutes notice.

Gabbard said she has been raising the issue of the increasing threat from North Korea since her first term in Congress. She said the people of Hawai‘i have long known that North Korea’s continued growing capabilities put us squarely within range of their intercontinental ballistic missiles.

“It is a travesty and a total failure of leadership, by both Republican and Democrat administrations, that their short-sighted policies over the last forty years have left the people of Hawai‘i and this country, our homes and communities, and generations to come, under the dark cloud of a nuclear threat from this point forward,” Gabbard said. “The only possible option to remove this dark cloud will come through the pursuit of serious diplomacy, and that will only be successful if two things happen. First, we must negotiate directly with North Korea and Kim Jong Un. Second, we have to understand why he is holding on so tightly to their nuclear weapons—it is because he sees them as his only deterrent from the US coming in and trying to topple his regime.

Kim Jong Un is looking at track record of how the United States overthrew Saddam Hussein in Iraq based on false intelligence that he had weapons of mass destruction, Gabbard said. The U.S. also promised the late Libyan leader Muammar Gaddafi that if he gave up nuclear weapons he would not be a target. The U.S. went after Gaddafi anyway and allowed him to be overthrown and killed.

“In order for serious negotiations to have a chance, our country must actually end our regime change war policies,” Gabbard said. “This is necessary for North Korea to see that we are serious when we say we are not interested in toppling their regime, and that we are serious about achieving peace, stability, and prosperity in a denuclearized Korean Peninsula.”

Gabbard has served as the U.S. Representative for Hawaii’s Second Congressional District since 2013. She is a Major in the Hawaiʻi Army National Guard and has served on two Middle East deployments. She is a member of the House Armed Services Committee and the House Foreign Affairs Committee.