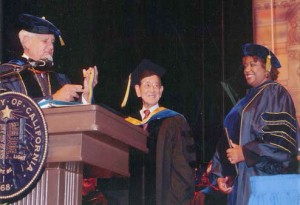 George Aratani, center, is presented with the UCLA Medal, the school’s highest honor to recognize his dedication and support.

A successful businessman, community leader and generous philanthropist, Mr. Aratani, along with his wife, Sakaye, and their family have been longtime supporters of the UCLA Asian American Studies Center.  The Aratanis established the George and Sakaye Aratani Chair on the Japanese American Incarceration, Redress and Community.

The chair, held by Professor Lane Ryo Hirabayashi, which is the first of its kind in American higher education, focuses on the World War II incarceration of Japanese Americans and their campaign to gain redress.

“My appointment as the inaugural recipient of the Aratani Chair has been a dream come true,” Dr. Hirabayashi said. “Not only have I joined a stellar set of colleagues in Asian American Studies at UCLA, but I have been able to contribute to the long tradition of Japanese American Studies and collaboration with community groups that have been undertaken by so many distinguished UCLA faculty, staff, and students over the years.”

In addition, as a means of supporting the linkages between campus and community, the Aratanis also established the George and Sakaye Aratani “Community Advancement Research Endowment” or Aratani CARE grants.  Each year community organizations and individuals are awarded funding for projects that will: Benefit and advance the Japanese American community; as well as strengthen ties between the Japanese American community and UCLA students, staff, and faculty.

After studying in Japan at Keio University, Aratani returned to Guadalupe, Calif. to run the family farm as well as other businesses his father had started. In 1942, Aratani and 120,000 other Japanese Americans were forced into internment camps.

That episode in American history had a devastating impact on the Japanese American community and according to Aratani, forever changed the lives of all Japanese Americans, especially those of his parent’s immigrant generation, most of whom never recovered financially or psychologically from the injustice.

In the post-war period, Aratani combined his business skills with his knowledge of Japanese language and culture to found Mikasa, a highly successful dinnerware company. He later founded Kenwood, a leading electronics company.

Aratani attributed his success to his father, a hardworking man who created numerous businesses.

The Center’s faculty, staff, and students have benefited tremendously from the generosity and vision of the Aratanis who have established endowments for undergraduate scholarships, graduate fellowships and undergraduate community internships.

In 2004, UCLA bestowed upon Aratani its highest award, the UCLA Medal, to recognize his dedication and support of the university.

According to Professor Emeritus Don T. Nakanishi, former director of the Center, “Mr. Aratani believes it is the duty of those like him, who have been fortunate to succeed in society to give back as much as possible through their donations or voluntary activities in order to ensure the continued growth and vitality of the Japanese American community.”

A memorial service will be held at 2 p.m. March 2 at the Aratani/Japan America Theatre at the Japanese American Cultural & Community Center, 244 S. San Pedro St. in Little Tokyo.