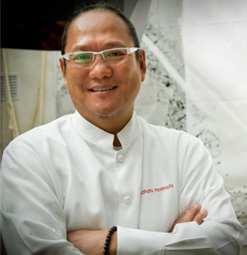 HONOLULU (Nov. 5, 2013) — Masaharu Morimoto, known to millions as the star of Iron Chef and Iron Chef America, is pleased to announce the opening of Morimoto Maui at 3550 Wailea Alanui Drive, Wailea, the signature restaurant at the new Andaz Maui at Wailea, on November 5, 2013.

Morimoto Maui features an intimate and stylish dining environment and offers Chef Morimoto’s distinctive cuisine, which seamlessly integrates Western ingredients with traditional Japanese culinary sensibilities and techniques.  Open for lunch and dinner, the restaurant boasts a dramatic, yet warm and welcoming décor on the shore of majestic Mokapu Beach, capturing the essence of Hawaii’s lush and tropical setting.

Morimoto Maui features high-quality, fresh ingredients, including locally grown fruits and vegetables, and a seasonal and ever-changing selection of seafood sourced from local waters and markets around the world.  This includes Chef Morimoto’s famed raw fish, which is procured from the world’s finest seafood sources, including overnight shipments from the renowned Tsukiji fish market.

At night, Morimoto Maui is the ultimate culinary experience for locals and travelers alike. Guests can enjoy several of the acclaimed Chef’s signature dishes as well as a selection of new menu items that have been created especially for the Hawaiian restaurant.

A hallmark of any Morimoto dining experience is the Omakase menu, which literally translates to “in the chef’s hands.” This multi-course tasting menu most vividly expresses Chef Morimoto’s culinary style. Offered exclusively on the Omakase menu is the Washimi flatiron steak, a Hawaiian born cattle crossbred with Japanese Wagyu, and raised in Oregon.

During the day, Morimoto Maui provides guests with a cool respite from the sunny local beaches with a lunch menu of à la carte offerings from the sushi bar and a variety of flatbreads, a Ribeye Beef Burger, and sandwiches, including a Lobster Roll with White Miso Aoli and the “Mori Cristo.”  The dessert menu boasts many local ingredients, and includes “The Road to Matcha,” a green tea cake with Kula strawberries and white chocolate rocks.  Available only on the Omakase menu is the Brown Rice Panna Cotta, using the husks of the restaurant’s house polished rice, served with an ice cream made from local Miso and butterscotch.

Rockwell Group’s design concept for Morimoto Maui was inspired by a modern Japanese beach house.  Featuring operable French doors on three sides of the dining room, Morimoto Maui opens up to the extraordinary views and the calm beauty of the island.  Uninterrupted 180-degree beach and ocean vistas are offered from nearly every seat in the restaurant and bar, further connecting guests to their environment through an intimate, relaxing experience.  Neutral toned materials and shading elements and hand crafted components have been incorporated into the design.  Japanese sculptures, decorative lighting and indigenous stones and woods express the local culture and heritage of the island, while Asian-inspired forms used throughout the spaces evoke the restaurant’s cuisine.  An intimate 138-seat restaurant, Morimoto Maui features some of the world’s most highly trained culinary talents.

Through the seamless integration of Western and Japanese ingredients, chef Morimoto has effectively created his own, unique cuisine—one defined by innovation and inspiration. In 2001, he opened Morimoto restaurant in Philadelphia. In 2004, Wasabi by Morimoto opened to great acclaim at the Taj Mahal in Mumbai, followed by a second Wasabi in Delhi in 2009. In January 2006, Morimoto brought his eponymous restaurant to New York City.

Earning the James Beard Foundation award for Outstanding Restaurant Design in 2008, Morimoto New York has garnered numerous awards, including being named by Condé Nast Traveler as a 2006 Hot List restaurant; one of New York’s Top 50 Restaurants by Travel + Leisure; Top Newcomer by Zagat Survey; and one of New York Magazine’s Best New Restaurants.  Morimoto’s first cookbook, Morimoto: The New Art of Japanese Cooking, was published by DK in 2007 and was nominated for a 2008 James Beard Foundation Book Award and won two IACP awards.

In July of 2010, Morimoto Napa opened at the Riverfront in Napa, California, followed by the fall debut of Morimoto Waikiki in The Modern Honolulu hotel. In 2011 Morimoto Mexico City opened in the Camino Real Polanco.

At Andaz Maui at Wailea guests escape to the breathtaking, sun-kissed shores of a world-renowned island destination. Located in the luxury resort community of Wailea, on the crescent-shaped shores of Maui, the 15-acre oceanfront resort is designed for the sophisticated island traveler. Featuring upscale services, impeccable guest rooms and residential-style villas and world-class restaurants that reflect the culture, style and ambiance of a tranquil tropical island.