WASHINGTON, D.C. (Dec. 17, 2012) — The passing of Senator Daniel K. Inouye of Hawai‘i last week at age 88, was the loss of the last and perhaps greatest Nisei generation veteran and statesman to serve the United States. 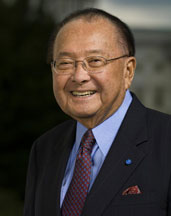 Moua said Inouye Hawai‘i’s first Congressman was later elected to the U.S. Senate where he served for nearly nine consecutive terms. In 2010, he became President Pro Tempore of the U.S. Senate, third in line for the Presidency.

“A fierce advocate and leader for civil and human rights, we send our thoughts and prayers to the Senator’s family,” Moua added.

“Our sympathy goes out to his family and to the people in Hawaii whom he represented so well,” said Moua. “A decorated World War II veteran and the longest serving public servant in the U.S. Senate, Sen. Inouye’s legacy lives on.”

Inouye began his career in public service at the age of 17 when he enlisted in the U.S. Army shortly after Imperial Japan attacked Pearl Harbor. He served with ‘E’ company of the 442 Regimental Combat Team, a group consisting entirely of Americans of Japanese ancestry. Inouye lost his arm charging a series of machine gun nests on a hill in San Terenzo, Italy. His actions during that battle earned him the Medal of Honor.

In 1979, Inouye was instrumental in advising his colleagues and the Asian American community toward the U.S. redress and reparations for the Japanese American Internment. His strategy in creating a Blue Ribbon Commission to investigate the World War II incarceration resulted in a bill that created the Commission on Wartime Relocation and Internment of Civilians, which ultimately led to the passage of the Japanese American Redress Act by Congress in 1988.

As the most senior member of the U.S. Senate and the President Pro-Tempore, Inouye was known for his distinguished record as a legislative leader, and as a World War II combat veteran with the 442nd Regimental Combat Team, who earned the nation’s highest award for military valor, the Medal of Honor.

Early in his tenure in the Senate, Senator Inouye delivered the keynote address at the 1968 Democratic National Convention, and was under consideration to become Hubert Humphrey’s vice-presidential running mate that same year.

On May 24, 2008, Senator Inouye married Irene Hirano, who is President of the U.S.-Japan Council. He was married for nearly 57 years to Margaret Awamura Inouye, a former instructor at the University of Hawaii, who passed away on March 13, 2006.

He has a son, Ken, who is married to Jessica Carroll from Rochester, New York, and a granddaughter Mary Margaret “Maggie” Inouye.

“Danny represented the people of Hawaii in Congress from the moment they joined the Union,” Biden said. “In Washington, he worked to strengthen our military, forge bipartisan consensus, and hold those of us in government accountable to the people we were elected to serve.

“But it was his incredible bravery during World War II – including one heroic effort that cost him his arm but earned him the Medal of Honor – that made Danny not just a colleague and a mentor, but someone revered by all of us lucky enough to know him,” he added. “As my mother would say, the greatest virtue of all is courage, and Danny was courage personified. From the battlefields of World War II where he received the Medal of Honor, to the floor of the United States Senate where he displayed incredible moral bravery, he was always the same – courageous and resolute.  He was one of the most honorable men I ever met in my life, and one of the best friends you could hope for. He was honest, and fiercely loyal, and I trusted him absolutely.

“Everyone in the Senate not only admired Danny Inouye, but they trusted him. We all knew he would do the moral thing regardless of the consequences – whether it was passing judgment on a President during Watergate or on another President in the Iran Contra hearings.  And Danny always remembered where he came from – and how hard his family had to struggle. From having to fight for the right to fight for his country in the all Japanese-American 442nd, to his keynote speech at the Democratic National Convention in 1968, he always spoke of the country’s struggles with racism and bias, and his call for a “new era of politics.” And to his dying day, he fought for a new era of politics where all men and women are treated with equality.”

“From his service in the legendary 442nd Regimental Combat Team and his unparalleled heroism demonstrated in a battle that earned him the Medal of Honor, the highest military honor, to 50 years of leadership and exemplary service in the Senate as the highest-ranking AAPI politician, Senator Inouye demonstrated to all of us that anything is achievable in the United States of America,” Kwok said. “As Chairman of the Senate Appropriations Committee, he was a tireless advocate for AAPI issues and concerns, including protecting the rights of Filipino World War II Veterans and the sovereign rights of Native Hawaiians.

“Senator Inouye dedicated his life to public service, and exemplified patriotism and citizenship. May we all follow his example of service to our country,” she added.

Floyd Mori, President and CEO of Asian Pacific American Institute of Congressional Studies, said Inouye was a giant among giants and a personal hero and mentor.

“I met him on the streets of Hilo, Hawai‘i where he was forging his first campaign for Congress,” Mori said. “I watched with awe as the Senator went on to have a storied career representing the people of Hawai‘i, championing the rights of veterans, and engaging in acts of leadership and dedication to the APA community. His was truly an American story.”

APAICS Board Chair Susan Jin Davis said Inouye was a pioneer in the APA community on many fronts, as a highly decorated veteran, as a champion of  justice in his efforts to get redress for Japanese Americans who suffered internment during World War II, for his outstanding public service in United States Senate, and as the highest ranking APA elected to public office.

“Senator Inouye is our model for future leaders in our community,” David said. “An American hero has been lost and will be missed by all.”

Secretary of Veterans Affairs Eric Shinseki said Inouye stood among the “greatest of our ‘Greatest Generation’.” He said Inouye made public service a noble and honorable calling.

“Dan Inouye’s courage on the battlefield and in Congress, his passion for making a difference in the lives of average Americans, and his intense modesty spoke volumes about a remarkable American, who embodied the bedrock values and quiet virtues of our Nation,” Shinseki said. “On behalf of America’s 22 million Veterans, I salute the memory of a brave man, a great patriot, a devoted public servant, an unwavering benefactor to Servicemembers and Veterans of every generation, and my friend and mentor. I extend my deepest personal condolences to the entire Inouye family.”

On behalf of the Asian & Pacific Islander Legislative Caucus, Assemblymember Paul Fong (D-Cupertino), chair of the API Legislative Caucus, said Inouye was a remarkable and beloved public representative and a great pioneer in civil rights and American politics.

“We must strive to honor his memory by dedicating ourselves to the community with the same tenacity as the Honorable Senator Inouye,” Fong said.

“Senator Inouye’s passing is a loss for the entire country, and we express our deepest condolences to his family,” Kwoh said. “We will continue to be inspired by Senator Inouye in standing up for the values of equality and inclusion that he embodied.”

U.S. Secretary of State Hilary Rodham Clinton said she was deeply saddened at the loss of her friend Inouye. She said he inspired others to reach for the American dream with his own example.

“No matter what barrier was in his way, Danny shattered it,” Clinton said. “He was the highest-ranking Asian-American politician in history and the first Japanese-American to serve in the House of Representatives and Senate.  He was a soldier, a Medal of Honor recipient and a hero.  But despite the accolades from a lifetime of service, he never lost his humility and compassion.”

Clinton said Inouye was an icon and a tireless advocate for the disenfranchised, minorities and women throughout the country. He spent his life working for a brighter future, and we are all better off for it, she said.

“His life of service to the people of Hawaii and to this nation embodied the essence of the American dream, and the heroism of the greatest generation,” Panetta said.

“A World War II veteran of the legendary 442nd Regimental Combat Team, his display of leadership and valor in a gun battle that cost him his arm rightfully earned him the Medal of Honor,” he added. “His determination to recover and his extraordinary career that followed continue to inspire wounded warriors today. In the U.S. Senate, he was one of the most stalwart and effective advocates of the Department of Defense, and a relentless champion of our men and women in uniform and their families.”