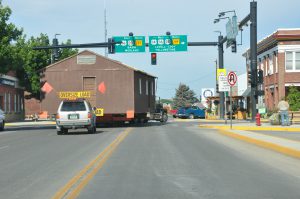 A former Heart Mountain barracks is moved from a privately owned farm back to the former internment center. (Photo Brian A. Liesinger)

Powell, Wyo. (June 16, 2016) — The Heart Mountain Wyoming Foundation has been announced as a 2016 Leadership in History award winner by the American Association for State and Local History (AASLH). An AASLH Leadership in History Award is the most prestigious recognition for achievement in the preservation and interpretation of state and local history.

This Award of Merit, which is presented for excellence in history projects, was given for the project titled Saving WWII History: Preserving an Original Structure from an American Concentration Camp. The project involved the successful move of an original Heart Mountain barrack that was relocated 80 miles from Shell, Wyo., back to the site of the former “Heart Mountain War Relocation Center” between Cody and Powell. The building, which was first used to house incarcerees at Heart Mountain, was later used to house returning World War II veterans in Greybull, Wyo., and then used to house Iowa State University students at a geology field studies camp near Shell.

“With its return, the barrack brings important historical significance as a powerful artifact of the Japanese American incarceration experience during World War II and beyond,” said Brian Liesinger, Heart Mountain Wyoming Foundation Executive Director. “It will remain a fixture of the landscape that can speak not only to the nationally significant history of Japanese American confinement during World War II but also to that of the Big Horn Basin and the state of Wyoming.”

The barrack was built in 1942 and was one of over 700 buildings that made up the confinement site between the towns of Cody and Powell. Before its return to what is now a National Historic Landmark, there were no remaining barracks on the original site.

The structure was donated to the Heart Mountain Wyoming Foundation by Iowa State University and it now sits just south of the Heart Mountain Interpretive Center. The project was funded by two crucial grants from the Foundation for the Episcopal Diocese of Wyoming and the Wyoming Cultural Trust, as well as by several individual donors who participated in the Foundation’s crowd-funding campaign. Since its return the barrack has been used to educate school groups about the realities of confinement at Heart Mountain during World War II.  It is also open to the public by special appointment to allow visitors a chance to experience the living conditions of the 14,025 people who were confined at Heart Mountain between August 1942 and November 1945. 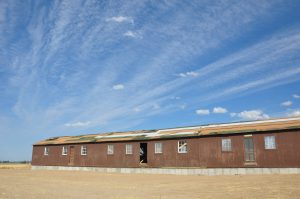 Heart Mountain barracks buildings are returned to the site of the former internment camp. (Photo by Brian A. Liesinger)

Heart Mountain received one of the 63 AASLH awards given this year, and is the only organization in Wyoming to receive this special recognition. The awards program was initiated in 1945 to establish and encourage standards of excellence in collection, preservation, and interpretation of history throughout the United States. The award not only honors significant achievement in the field, but also brings public recognition of the opportunities for small and large organizations, institutions, and programs to make contributions in this arena.

The award will be presented to the Heart Mountain Wyoming Foundation at the 2016 AASLH Annual Meeting in Detroit, Mich., on September 16 at a special banquet sponsored by the History Channel.

“We are honored to have been selected, and there are many people who deserve a share of the credit for this project.” Liesinger said. “In addition Iowa State’s donation of the building, Northwest College provided support for archaeological work essential to the project. We were also blown away by the support of the Foundation for the Episcopal Diocese of Wyoming, the Wyoming Cultural Trust Fund, and so many individuals who helped us save history. Receiving this award is a tribute to all those who collaborated to

The Heart Mountain Interpretive Center is located between Cody and Powell, WY, on Highway 14A. It is open in the winter Wednesday through Saturday from 10am to 5pm and daily in the summer with the same hours. Admission is $7.00 for adults, $5.00 for seniors and students, members and children under 12 are free. For more information please call (307) 754-8000 or visit www.HeartMountain.org.