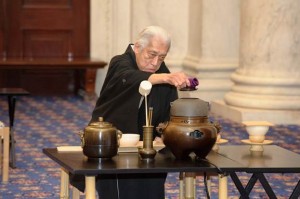 Dr. Genshitsu Sen, the fifteenth generation Grand Tea Master of Japan in the Urasenke tradition, presents an offering of tea to the memory of Senator Inouye.

The late U.S. Sen. Daniel Inouye had intended to host the ceremony before he passed away late last year. Hirono continued the event which was also in honor of the late Senator.

“Nothing could be more important than the U.S. Japan relationship,” Hirono said at the ceremony. “It is this friendship and alliance that has produced peace in the Asia-Pacific region, security and economic vitality. I want to thank all of you who are here to participate and to also let you know that Senator Inouye was committed to strengthening that relationship. All of us build on his emphasis.”

The ceremony was held in the historic Kennedy Caucus Room, the location where Senator Inouye chaired hearings on the Iran-Contra scandal in the 1980s.

Check out the video of the event at http://www.youtube.com/watch?v=Ryb-xkE0FNc