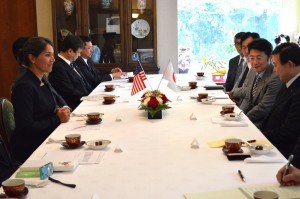 U.S. Rep. Tulsi Gabbard met with the Japanese Consulate of Honolulu and Japanese Diet Members on Jan. 20, 2014, to promote cultural exchanges and discuss economic relations between Japan and Hawaiʻi, the Trans-Pacific Partnership, military issues, renewable energy, tourism, and other important issues facing the U.S. and Japan. (Photo by Office of Rep. Gabbard)

Honolulu (Jan. 20, 2014) — U.S. Rep. Tulsi Gabbard (HI-02) on Monday met with members of the Japanese Diet to reaffirm the United States’ strong partnership with Japan and recognize our shared interests in the Pacific region.  They discussed economic relations between the U.S. and Japan, tourism, as well as current developments in Okinawa.

“As the United States focuses on the Asia-Pacific region, the U.S.-Japan relationship is critically important for stability in Northeast Asia,” said Congresswoman Tulsi Gabbard. “As we continue to draw down our military presence in the Middle East, the United States must ensure that appropriate resources are being invested in our presence in the Pacific.  Japan is not only a close friend of our country, but they are also a vital partner in the effort to maintain a peaceful, prosperous, and stable region.

“Hawai’i, in particular, continues to enjoy a very special relationship with Japan. With the passing of Senator Daniel Inouye, it is important that all of us carry on the work that he did throughout his life, to ensure that the strong bond between our two countries endures.”

On Friday Gabbard stated her support for the Pentagon’s announcement that it would hold the first-ever U.S.-ASEAN Defense Forum in Hawai‘i on April 1-3, 2014, U.S. Sec. of Defense Chuck Hagel will host defense ministers from each of the 10 member nations of ASEAN, the Association of Southeast Asian Nations at the forum.