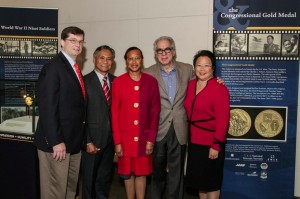 The Holocaust Museum Houston launched the exhibit of “American Heroes: Japanese American World War II Nisei Soldiers and the Congressional Gold Medal” with a series of public events honoring the veterans on December 19 and 20. The exhibit runs through January 26, 2014.

Nearly seven decades after the beginning of World War II, the Congressional Gold Medal – the nation’s highest civilian award – was bestowed collectively on the U.S. Army’s 100th Infantry Battalion, the 442nd Regimental Combat Team and the Military Intelligence Service (MIS) for their extraordinary accomplishments in the war.

The men in these units, comprised almost entirely of persons of Japanese ancestry, fought with bravery and valor against America’s enemies on the battlefields in Europe and Asia, even while many of their parents and other family members were held in internment camps.

As part of its opening weekend activities, the Holocaust Museum Houston screened “Honorable Journey” written and directed by Stephen Menick and produced by AARP.The 16-minute documentary charts the 70-year struggle of Japanese-Americans who came of age during World War II. Narrated by actor George Takei, the film features conflicts of loyalty to tradition, family and country, played out against the backdrop of world war.

Eyewitnesses and descendants recount a lifelong journey from barbed wire, battlefields, and jail cells to vindication and the highest honors in the land. As the late Senator and 442nd veteran Daniel Inouye says in the film, “That’s one thing about democracy. You must be patient.”

“AARP’s mission has always been to ensure that the opportunity to pursue the American Dream remains accessible for every American and every generation,” said Daphne Kwok, AARP Vice President of Multicultural Markets and Engagement. “Honorable Journey is a reflection of our mission and the commitment we have to continue to play a positive, vital role in advocating on behalf of Americans of Asian and Pacific Islander descent, particularly those age 50+.”

The Nisei Congressional Gold Medal tour launched in January 2013 and was shown at some of the top museums in the country, including the National World War II Museum in New Orleans, the Bernice Pauahi Bishop Museum in Honolulu, the Japanese American National Museum in Los Angeles, the de Young Museum in San Francisco, the Oregon History Museum in Portland, the Chicago History Museum, and the Holocaust Museum in Houston.

At the conclusion of the tour, the Congressional Gold Medal will be on permanent display in “The Price of Freedom” exhibition at the National Museum of American History in Washington, D.C.