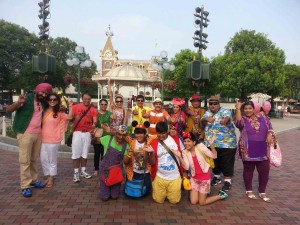 MUMBAI (July 31, 2014) — After entertaining the audience with Gokuldham Premiere League 3 and a nail-biting thriller sequence with adept C.I.D officers, Asit Kumarr Modi’s successful comedy series, “Taarak Mehta Ka Ooltah Chashmah” has now integrated with Disney India to take the entertainment quotient to the next level. In its upcoming episodes, the cast of Taarak Mehta ka Ooltah Chashmah will be seen enjoying at the Hong Kong Disneyland.

Commenting on Disney India and Taarak Mehta Ka Ooltah Chashmah integration, Asit Kumarr Modi, Producer, said “Disney is a world famous brand and its stories and characters are loved by kids and families. We are glad to be associated with them and also become the first Indian show to shoot at Hong Kong Disneyland. At Neela telefilms, we continuously work towards entertaining our audiences by bringing in newer flavours to our storylines. Hong Kong Disneyland special, will surely be a visual delight for our viewers.”

The story begins with Tappu Sena entering a Disney contest through which they win an all paid trip to Hong Kong Disneyland. Tappu Sena along with their families — Bapu ji, Jethalal, Daya, Babita, Tappu Sena, Bhide, Dr. Haathi, Komal, Sodhi and Roshan and even Asit Kumarr Modi will be seen enjoying the rides and interacting with their all-time favorite Disney characters – Mickey Mouse and Minnie Mouse at Hong Kong Disneyland.

While everyone is excited about their trip, Aiyyer gets left behind as he misses his flight, which makes Jetha happy. Jetha also takes on the responsibility to be the group leader. Some highlights of the trip include, Gada family getting selected to be a part of the popular gate opening ceremony at Hong Kong Disneyland, Sonu gets to live her dream, by dressing up like her favourite Disney Princess Cinderella and much more.

Dilip Joshi aka Jethalal Gada said, “We had an amazing time in Hong Kong Disneyland, while enjoying the different rides and attractions of the park. We even got to witness the stunningly beautiful fireworks display and also be a part of the famous parade! Altogether we had a great experience and have come back with some fond memories.”