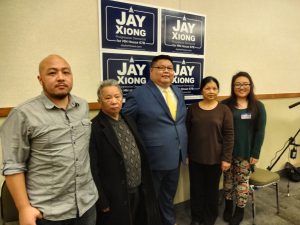 The family of Jay Xiong, center.

My name is Va and I am Jay Xiong’s father. I came to this country in my twenties as a refugee fleeing war. During the Vietnam War, I and countless thousands of my ethnic Hmong people bravely fought alongside our American brothers in arms against communist forces across Southeast Asia. The fighting for the Hmong in Laos was particularly brutal, and many thousands died. Those of us who made it here are lucky. We served every role for American forces and allies, from intelligence gathering to search and rescue of downed pilots to being generals and pilots ourselves. That we survived all the way from the Mekong River to the Mississippi River is a miracle. I came to the Midwest in the 1970s, like many wide-eyed refugees and immigrants, with the dreams of endless possibilities for myself and my future family.

Jay’s mother and I met in the late 70’s and we married in 1980. We started our family, and Jay was the first born. Like many first children of immigrants and refugees, Jay served an immediate role as a third parent to all his younger siblings. Jay’s mother and I worked hard to put food on the table and keep a roof over all of us, so Jay often had to babysit, feed and raise his own siblings. I have worked jobs in janitorial services from West Publishing to Sears retail stores, and was forced to retire only recently due to a stroke which incapacitated me from my most recent job as a factory machinist.
During the difficult aftermath of my stroke, Jay’s mother became the sole wage-earning parent in our household, which meant increased financial responsibilities and burdens were given to Jay as the oldest child. He did not complain, and worked very hard to keep us all together, even though we came very close to losing our house during this time. I may have recovered from a coma and survived a stroke, but nothing in my flesh and bones can ever make me forget the leadership, love and dedication that Jay showed in this difficult time for our family. This is why Jay is so passionate about being a progressive champion for a living wage, safe and sick/parent leave time, as well as universal healthcare. If this incident has showed us anything, it reminds us why we fight so hard on the values and platforms we do as Democrats.
This is why this month as I turn 65, I could ask for no greater gift and favor from you than to ask that you support my son to be our next State Representative from 67B in the East Side of St. Paul. For my birthday, I encourage you to support of my son’s campaign so that he can go forward and fight for all of us. My son has given our family a lot, but he has a lot more love and service to give to the whole community. I hope I can count on your support to help send Jay to the Minnesota Legislature. Please vote for him this November.
Share