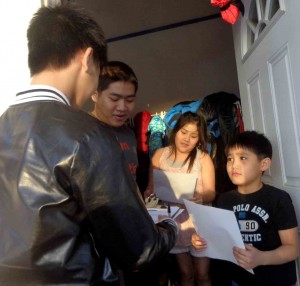 The Minneapolis Health Department is developing plans for a bikeway in north Minneapolis, and has offered three different possible routes.  The bike path would stretch between Plymouth Ave. N. and Shingle Creek, about 35 blocks.

Maps of the proposed routes show that on most of the effected residential blocks, the street and the parking would be  replaced with the bike path.

The Hmong families surveyed were given maps showing the possible bike routes, and then asked  these questions:

• Did you know about the proposed bike path?

• Has anybody asked you your opinion of the proposed bike path?

• Based on the map, do you want to see the bike path go in, or keep your street the way it is?

• All 20 families said that nobody had asked them of their opinions of the proposed bike path.

Many Hmong families surveyed mentioned losing parking as a top concern. They said that many Hmong households have a lot of family members and a lot of cars, and need  to be able to park their cars in front of their house.

Several surveyed Hmong families also said that they frequently have large ceremonies and gatherings and  parties with many guests, and they need the street parking to accommodate their guest’s vehicles. One student surveyor said his family just bought a new car for his sister to get to work, and his family doesn’t have space in the back to put the new car.

Several Hmong families also expressed concerns about safety.  Many Hmong families report that their kids have had bikes stolen – that their children go for a bike ride and are ambushed by other youth who push them off their bikes and then ride off with the stolen bikes.

Many Hmong families in north Minneapolis report having lost bikes this way. Some Hmong families worried that if  the bikepath is built without improving safety, more people will get jumped and their bikes stolen.

Proponents of the bike path are planning a major publicity and outreach effort in May.

Several Hmong families living along the proposed routes are meeting with councilmember Blong Yang to discuss the planned bikeway.

Hmong families said that  after the publicity campaign,  all the families living on the proposed routes need to be surveyed, and that this survey  needs to be done by people who are neutral and without financial ties to organizations promoting the bikeway.

And some Hmong families have said that if the bikeway is built and they lose their street and parking, they want the option of being bought out with their moving expenses paid for.