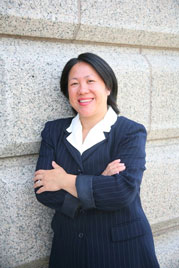 WASHINGTON, D.C. (Feb. 3, 2017) — Asian Americans Advancing Justice | AAJC (Advancing Justice | AAJC) announced today that its president and executive director, Mee Moua, is leaving the organization. Moua, a respected leadership voice in the civil rights community, departs in mid-March after five years at the helm of the Washington, D.C. based national nonprofit organization. An announcement of her successor is expected next week.

“Under Mee Moua’s leadership, Advancing Justice | AAJC lead the effort to secure reunification for Filipino American World War II veterans and their children; fought to protect language access, affirmative action, and technology equity; and ensured that the United States Census is more inclusive of our changing demographics,” said Parkin Lee, chairman of the board of directors. “She stood up for immigrants and refugees, she spoke out against hate and discrimination affecting the most vulnerable in our diverse communities, and she fought for voter protection and voter access to the ballot box. We thank Mee Moua for her tireless leadership.”

During her tenure, Advancing Justice | AAJC was the principle lead in the Asian American civil rights community to engage with the White House and Congressional leaders to push for family reunification as part of the permanent solutions to the broken immigration system.

Moua invested in the creation of a national community partners infrastructure to ensure that Asian Americans across the country have a voice inside the Beltway. She ensured that Asian Americans have a seat at the table on civil rights issues before the Supreme Court, particularly on affirmative action, reproductive justice and LGBTQ equity. She was a frequent public spokesperson on behalf of Asian American communities. She has appeared on CNN, selected twice as Washingtonian Magazine’s “100 Most Powerful Women,” and was a featured civil rights speaker at the 50th Anniversary March on Washington.

“It’s been my distinct honor and privilege to fight on behalf of all our communities alongside my colleagues at Asian Americans Advancing Justice and among our many civil rights and philanthropic partners in Washington, DC and across the country,” said Mee Moua.

“It is an understatement to say that we face dark days ahead, but I believe that the good women and men at Advancing Justice, the frontline fighters in our movement, and the people of this country have already demonstrated that we have the gumption and the courage to stand up and keep fighting,” Moua said. “I know that our mission to advance civil and human rights can, and will be achieved because we have faith in each other and are firmly committed to working together.”

The executive directors of Asian Americans Advancing Justice in San Francisco, Chicago, and Atlanta also took a moment to reflect on Moua’s leadership.

“As a fearless Hmong refugee and immigrant woman, Mee has been a civil rights leader who presents a voice for those most affected by harm,” said Aarti Kohli, executive director of Asian Americans Advancing Justice – Asian Law Caucus. “For this perspective and vision, we honor and respect her as a leader in our movement.”

Asian Americans Advancing Justice | AAJC has a mission to advance civil and human rights for Asian Americans.  We strive to empower Asian Americans and Pacific Islander communities across the country by bringing local and national constituencies together, advocate for federal policy that reflects the needs of Asian Americans, and promotes a fair and equitable society for all.