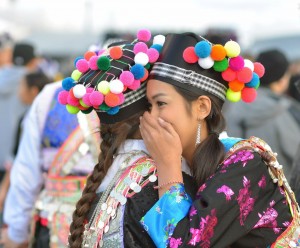 MINNEAPOLIS (March 10, 2014) — Hmong Wearable Folk Arts Multimedia Project is a presentation that incorporates a lecture and discussion with an exhibition highlighting the changes of traditional Hmong clothing to the modern Hmong stage outfits used in Hmong dances.

Designed as a traveling exhibition that will showcase throughout Minnesota, make sure to keep your eyes and ears opened.

Ange Hwang, executive director of Asian Media Access, opened up the presentation discussing her passion in understanding the Hmong Embroidery patterns and motifs found stitched within the Hmong costumes.

See Xiong, project director of Pan Asian Arts Alliance then followed up with a detailed presentation about the Hmong costume and the transformations that it went through from China, to Thailand, and to America.

Today Hmong people live in many different places. Some still live in China, Vietnam, Laos and Thailand but many other Hmong people reside in Canada, France, Australia, and the US. Having the Hmong people live in separate parts of the world, each Hmong group developed its own unique dialect in addition to the two traditional dialects (White Hmong and Green Hmong).

There are many different dialects of Hmong. Two of the most widely spoken dialects are White Hmong and Green Hmong. Each dialect is special not only because of its’ linguistic differences but also with its traditional clothing differences. In the traditional Hmong clothing, color variation and style of traditional Hmong clothing originally told other Hmong people about their dialect and where they came from. For example Hmong women who spoke the Green dialect traditionally wore a pleated batik (type of fabric using a wax-resisting dye technique) skirt while Hmong women who spoke the White dialect wore a white pleated skirt. Not only that, but Hmong men who spoke the Green dialect wore a traditional shirt that had a higher cut, exposing their abdomen. Another example would be the Flower Hmong women who have a much more intricate traditional Hmong clothing stitched with many different colors from red, pink, orange, yellow, and blue onto their skirt. Talk about explosion of colors!

Considering the fact that the Hmong people did not start out with a written language, they resulted to using symbols and geometric shapes to communicate. They then incorporated the symbols into their embroidery, which includes story cloths and traditional clothing. Most popularly found on both story cloths and traditional clothing are the multiple triangles used as a boarder. These triangles are not your normal triangles. They actually symbolize “mountains”, a geographical marker that the Hmong people used many times as a shelter and also as a place to call home during war-torn times.

As time passed, traditional Hmong clothing also changed. Traditionally made by hand to display the workmanship and skills of a Hmong girl, more and more Hmong clothing is now made by machine and is becoming more modern in fashion. Instead of adhering to the original reasons of wearing Hmong clothing to denote one’s dialect and region, many Hmong people now mix and match whatever they think as fashionable.

Hmong clothing has become even more modern as Hmong dances start designing their own costumes. Iny Asian Dance Theater (IADT), a well-known dance troupe based in Minneapolis Minnesota makes all of their costumes by hand. Not only that, but Iny Xiong, choreographer and also lead designer for IADT, proudly draws from her Hmong heritage, incorporating symbols from traditional Hmong clothing and jewelry into the dance costumes.   We invite you to join us by coming/learning about the ways that traditional Hmong costume has transformed throughout the years. Below are the next places that the exhibition will visit, please mark your calendar:

Special thanks for the write up of this cultural interpretation – “Transformative History of Hmong Dress, Music, and Dance,” by Dr. Nengher N. Vang (Elizabeth City State University).

This project is supported in part by Hennepin County Government Center; National Endowment for the Arts; and MN State Arts Board (Through an appropriation by the Minnesota State Legislature from the State’s arts and cultural heritage fund with money from the vote of the people of Minnesota on Nov. 4, 2008.)