“This season was filled with many ups and downs,” stated Coach Fong Vang.  “We struggled out of the gate, losing our first four games.  We eventually had a ‘heart to heart’ team meeting which really set the tone for the rest of the season.”

The Lady Warriors won 8 of their last nine conference matches.  “We definitely turned the season around,” added Coach Vang.

The team’s momentum carried on in both the MN State Sectional and Eastern Minnesota Athletic Conference tournaments.  “Going into the EMAC tournament we were seeded No. 5 and played the No. 4 seed,” stated Coach Vang. “We won and moved on to the semi-final game where we lost to the team that eventually won the tournament.”

In the Section 4A tournament, the Lady Warriors made history by defeating Trinity School at River Ridge in three straight games. Coach Vang added, “No Hmong College Prep Academy team has ever advanced in any sport to the second round of sectionals so we were really excited. We eventually lost in the next round but the experience was incredible.”

Coach Vang mentioned the contributions of a few of his players as keys to his team’s success. 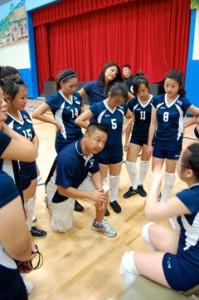 HCPA Girls’ Volleyball Coach Sher Yang talks to the team during a game.

“Junior Crystal Vang was consistently a top performer for us.  She is so versatile that she can pretty much play any position.  She started off as our setter and eventually moved to our outside hitter.  She really shined and began to improve her game.  What really impressed me was how Crystal grew as a player both in terms of her skills and the mental side of the sport.  She was able to see more of the court and use strategy when attacking.”

“Shouaha Khang was also very instrumental in our success.  She started off as an outside hitter and moved to become our setter.  She initially did not want to set but after some coaxing she agreed and became our top setter.  Her heart to play and her willingness to do what was needed for the team really helped us in our success this year.”

Regarding next year, Coach Vang is excited about his team’s future prospects.

“I am really looking forward to next year.  We have a group of really talented girls and the fact that they have a year or two under their belt tells me that we will be just as successful.  We will definitely miss the seniors but these young girls are ready to step up to the challenge.

“It was a frustrating game because we produced so many scoring opportunities inside 10 yards but kept shooting the ball over the goal or directly at the goalkeeper.  In overtime, we knew the game could end any minute because it was getting dark.  Freshman Kapaw Htoo dribbled past four defenders and calmly placed the ball into the left side of the goalkeeper to give Hmong College Prep Academy the championship.”

Htoo ended the season with 27 goals and 19 assists in 13 games which was good enough for third in the state in total points.  Coach Yang also credited his team’s defense.  “Our defense really stepped it up in the end of the year, posting 5 shutouts in the final 6 games.”

“This year went well, considering we are only in our 2nd year as a soccer team. I’m pretty happy being that 75% of our players have 2 years or less soccer experience. Although we will lose nine seniors, to graduation this year, the experience gained will help build this program. We started two eighth graders and one freshman, but there are still many current students who have expressed interest in playing next year because of the success of this team.”

Coach Yang added, “I am excited to get this program up and running to where, one day, we will be able to bring home a state title.  It will be a tough road, but if students play soccer in the summer competitively, their level of play will increase and help improve the quality of the team.”

Hmong College Prep Academy is located at 1515 Brewster Street in St. Paul, just southeast of the Minnesota State Fairgrounds. HCPA provides free tuition, breakfast, lunch and bus transportation for all students. For more information or directions, interested parents and students can call 651-209-8002 or online at www.hmongacademy.org. The school is currently enrolling in grades K-12.