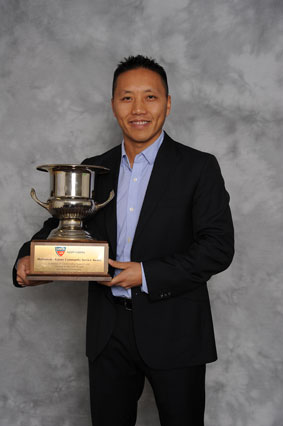 Yang, who is also the coordinator for the St. Paul Urban Tennis Program, was presented with the honor at the 2012 USTA Northern Annual Awards Banquet on November 17 at the Fred Wells Tennis & Education Center in St. Paul.

The award is given to the person for his or her outstanding fieldwork in recreational tennis. It is also awarded for significant contributions in developing community-based tennis programs through community centers, schools, parks and Community Tennis Associations.

In the winter, Yang volunteers his time, offering free tennis lessons to all high school players in St. Paul. He works as a Jr. Team Tennis coach in the summer, runs a summer tennis tournament and serves as a consultant for growing tennis within the Asian community.

Yang’s contributions go beyond the basic expectations of a coach as he finds scholarships, equipment and opportunities so kids can play tennis. He also serves as a mentor supporting kids and their families, both on and off the court, including making personal phone calls to parents explaining why tennis is important to their child’s future aspirations.