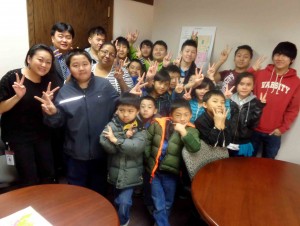 Above, Around 22 Hmong students and faculty from North Minneapolis, squeeze into Minneapolis City Councilmember Blong Yang’s office on March 28, 2014. (Photos by Jay Clark)

First they crammed into councilmember Yang’s office.  Then they walked the passages of city hall. The students got to see council chambers, where for 15 minutes they took over city council.

Along the tour, students talked with councilmember Yang about what they wanted improved in their neighborhood, from fixing potholes to fewer gunshots to more soccer fields to less snow. 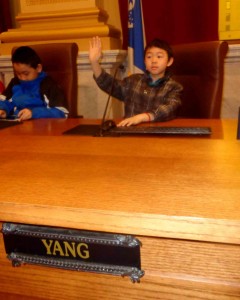 Hmong youth try the chairs of the Minneapolis City Council Chamber out for size. (Photos by Jay Clark)

Councilmember Yang talked about how important it was to stay in school, and hoped some of them would follow him as members of the Minneapolis city council.

Blong Yang is Minneapolis’s first Hmong councilmember. Many of these students know him better as soccer coach for the Farview Park soccer team.

Attorney Blong Yang is serving his first term as a Minneapolis City Councilmember for Ward 5, which includes the neighborhoods of Jordan, Hawthorne, Willard-Hay, Near-North, Harrison, Sumner-Glenwood, and North Loop.