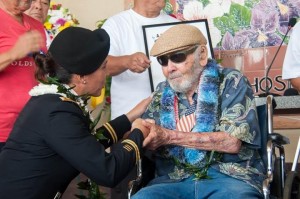 U.S. Rep. Tulsi Gabbard, who is also a major in the U.S. Army Reserve, thanks a military veteran on Kauai on Veterans Day. (Contributed photo)

Gabbard delivered remarks in the morning on Kauaʻi at Veterans Cemetery in Hanapepe. Later that evening on Oahu she spoke aboard the USS Missouri memorial at sunset.

Gabbard spoke about showing thanks to these heroes by delivering on the promises made to them and empowering them as they continue their mission of service. She paid special tribute to those who served in Vietnam, as this year marks the 40th anniversary of that war’s end.