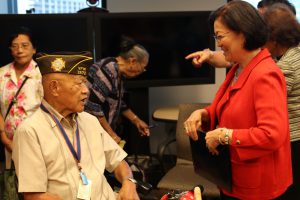 HONOLULU (Sept. 22, 2017) — U.S. Sen. Mazie Hirono (HI-D) called on Filipino World War II veterans and their families to register to be recognized as collective awardees of the Congressional Gold Medal, one of Congress’ highest civilian honors.

“Filipino World War II veterans have fought for decades for the recognition and benefits they were promised in return for their service,” Hirono said. “The Congressional Gold Medal is a fitting tribute to their contributions during the war and their perseverance, and I look forward to celebrating with them next month. I urge all eligible veterans and their families to register with the Filipino Veterans Recognition and Education Project to be included in this honor.”

Hirono and Gabbard’s Filipino Veterans of World War II Congressional Gold Medal Act (Public Law 114-265), was signed into law by President Obama and awarded the medal collectively to the over 260,000 Filipino and Filipino-American soldiers who responded to President Roosevelt’s call-to-duty and fought under the American flag during World War II.