The event in our nation’s capital was to engage in a dialogue about addressing the issues affecting our community today, to learn about advocacy work happening across the country, and to network with like-minded leaders. These events were held following the White House Initiative on Asian Americans and Pacific Islanders’ briefing for the community earlier in the day. 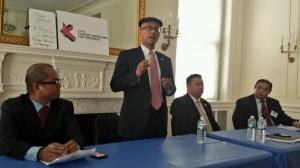 During the first part of the town hall meeting, a panel of experts and invited guests participated in a lively discussion on ways in which the community can advance local and national priorities through new and innovative approaches. The panelists were: singer, actor, producer and founder of Broadway Barkada Liz Casasola; mental health and LGBT advocate Dr. Kevin Nadal; immigration lawyer and founder of San Francisco Veterans Equity Center Lourdes Santos Tancino; and immigration reform advocate and Executive Director of Asian Pacific American Labor Alliance Gregory Cendana.

“People typically see the arts as being non-political,” said panel member Liz Casasola. “But this forum reaffirmed my belief that promoting self-expression through the arts can be a powerful tool in encouraging our fellow Pinoys to have the passion and courage to be effective advocates for the community.”

The second part of the town hall meeting, featured a panel of Filipino American elected officials from across the country representing the community in all levels of government. The panel discussed the important role elected officials play in representing all Filipino Americans in the political negotiations that shape the policies that affect the community. The panelists were: Hawaii State Senator William C. Espero; Jersey City, NJ City Council President Rolando R. Lavarro, Jr.; and Cerritos, CA City Councilmember Mark E. Pulido.

“Today’s events allowed us to come together and discuss the need for a national network of Filipino American elected officials in an effort to increase the political empowerment of our community,” said Genevieve Jopanda, National Co-Chair for Kaya: Filipino Americans for Progress. “We as a community need to use our growing numbers to get a seat at the table.  To do that, we need to learn the science of elections and mentor our future generation by share that knowledge with aspiring Filipino American politicians.”